While the weather is at least decent on most of my hikes, and probably over half of them has weather close to perfect, there are times when my luck just runs out. Sometimes that means just gloomy and misty weather, which is the best of the bad possibilities, but sometimes it gets to outright rain. If it’s my own plan, then I might just delay it, but if it’s during a longer stay or just an event I signed up beforehand, then I just go and take some shorter route, but go anyway. As we say here, there’s no bad weather, only bad equipment.

In the past years, November was usually safe bet for at least gloomy weather if not rain. Compared to the shining colors of early autumn, it usually gets sad in that one month. It’s probably the reason why I have the least photos made in November.

END_OF_DOCUMENT_TOKEN_TO_BE_REPLACED

Following from my previous read, I went on to the second book pretty much right away. It picks up pretty much where the first ended. With Warrick’s first attack thwarted by the end of first book, the situation changes and Delno starts putting his plan together for bringing peace to the world, even though it’ll not be easy.

END_OF_DOCUMENT_TOKEN_TO_BE_REPLACED

I was thinking a bit about what kind of people would a king (or sovereign with any other title) surround himself with, to rule the land and to achieve his own goals. That would most likely depend on personal priorities, someone bound on expanding the borders would probably have many strategists among those to listen the most.

Even in calmer times, one would probably have representatives of the army and the diplomats to take care of any trouble, or to prevent it if possible. Those interested in expansion by force would probably hire engineers to create weapons of destruction, while those that would want to build new cities would consult architects.

To deal with the everyday life of the land, I’d say that they’d need someone to relay the problems of common people because it’s always better to solve them before they get out of hand; and representatives of the nobles, who could be tempted to conspire together for a change in leadership, if they felt they are not treated as they deserve.

Of course, the ruler’s personal goals and interests would have a significant role, for which I’d borrow example from history: Rudolf II (wikipedia) of Austrian monarchy (born 1552, crowned 1572/1576, dethroned 1608, died 1612). He was a collector of arts and curiosities and supporter of alchemy and astronomy, and so he brought several experts in those fields to his closest circles.

There goes my first new read of 2018. It was in the depths of my potential TBR list, and the author himself mentioned it’s on sale on Goodreads group I am in, so I was like, why not give a try.

I am glad I did. This was, at least for me, very fresh and lighthearted take on dragon fantasy. Very enjoyable even without the ever-present threat of mad tyrant on the horizon. I’ll try to keep this spoiler-free as much as I can.

END_OF_DOCUMENT_TOKEN_TO_BE_REPLACED

With this winter being quite warm here so far, I am looking back at the previous years. Even then, the experience was vastly different. There was a year when I was hiking a day before Christmas and it was muddy, and two weeks later it was close to a meter of snow. And there were years when it was the exact opposite.

New year had lots of snow. Four days before this photo was taken, I hiked the mountain that is covered in clouds, and there was a lot of snow around, even in these lower portions. Not so much now. Eventually some snow returned in February for one more winter-like walk around, but that was all.

This was pretty much the opposite. The snowfall started pretty much on new year, and it went on for the night after. Even in this place that is pretty much lowlands, the land got quite nice cover of snow. Thin, but still enough for a good winter feeling. Combined with the fact that the temperature was just below zero, it was quite pleasant time.

The original plan was something around 10km, but being in easy terrain, I decided to extend it, ending up at nice 17km. Unfortunately both lookout towers on the way were closed.

Two weeks later, I went for another hike. It was place that is normally crowded, and was so during the weekend. Needing to clear my head before exams, I went there on Monday. It was -13°C and there was quite a lot of wind the previous night, which meant I had to push my way knee-deep in snow in the side path I used. It was better on the main path, but I did not stay long there.

If you can’t see the way, make one.

The (almost) circuit ended up at 18km, but in the cold and the fact I was making my own path for most of it, made me quite exhausted. More so than 25km in summer.

I admit I have no clue how the new year looked like. I made some mistake on the day before and my overly sensitive digestion took it very poorly. I had to force myself to eat at least something for the next four days and lost almost 4kg of weight. But I did not want to cancel coming for the planned hike. Fortunately, by Friday I was doing better and so I went for it, despite still feeling quite empty and not having eater seriously since 1st.

The weather was, in a way, perfect. Dry and frozen weather is the best for far sights, if it’s sunny as well, the best for really nice winter photos. There was a small trouble: -22°C and my weakened body. But then, I am long saying that there is one solution that fixes all problems: Go to the hills. It worked. I went on and even with the cold, reached the peak in my usual time around 1h 40 minutes, something many would have trouble in summer. 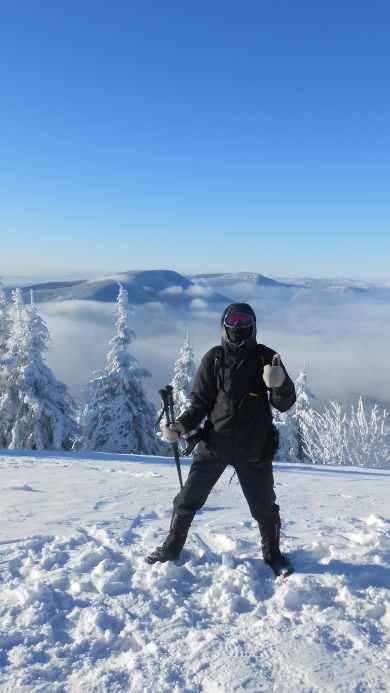 Even though it’s place I am visiting pretty much every year, this was something I had to enjoy. Usually very crowded place now being almost empty and with sights I only saw on pictures before. I walked around for almost twenty minutes, just enjoying it and taking some photos here and there, which is not easy in such cold. It’s hard to take them with gloves on, and it’s definitely not comfortable to remove gloves in such cold, even if for a few second. The fact that the gloves I had can uncover just the fingertips helped, but my thin fingers get cold far too easily.

I had a bit of adventure on the way back, as I decided to take different trail than I used to get up. Unfortunately, the snow-covered trees meant the trail marks were invisible and so I just followed some trails. This eventually sent me somewhere into wilderness on steep descent and I was hoping every single moment that I won’t end up tumbling down and that no one will see me as the are is natural reserve and I was not even sure it was legal to be there. Still, in retrospective, it was very nice day and so far my best winter hike (and coldest one.)

I guess I might do such looks back for every month in the future.

Another year begins, and the first weekend of a new year, I usually go for a walk (it’s not always a serious hike). There’s quite some striking difference between the first weekend of 2017 and 2018. While last year, it was cold wave here in the central Europe and I was forced to pile several layers of clothes to stay warm, this year I had the opposite problem.

I guess that the situation reversed with the cold wave in USA and Canada… anyway, let’s see that comparison in pictures. 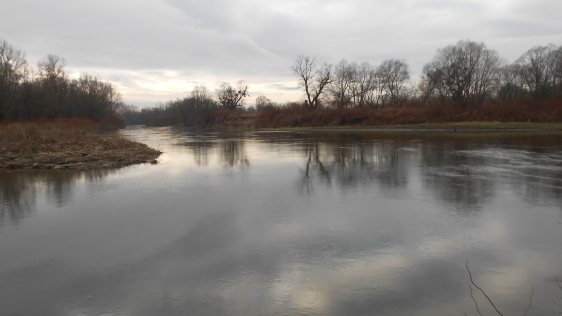 While there is some snow in the hills, it’s melting and very uncomfortable for hiking and that’s for a few weeks already. Forecast these days says that there won’t be much of winter in the near weeks, so I guess I am left with hopes for mid-February, which is usually the time of some colder days even in the years where the year’s beginning was warm.

This post will be a mixture of book-related and game-related thoughts, because, as I’ve planned I got to re-read the book about Illidan in the last two days. The choice was simple as with Antorus raid being opened a few weeks ago, the story of World of Warcraft’s (in)famous demon hunter has come to an another end. And what best way to part with him than by reading the book detailing the first end?

END_OF_DOCUMENT_TOKEN_TO_BE_REPLACED

I was not writing much (more like not at all) in November, but I got back to it in December. I knew I should have “a bit of time” for more writing between Christmas and New Year. In fact, I was decided that I’ll most likely spend the evening (and waiting for fireworks) writing, because I like solitude and it felt like the most enjoyable way to spend the evening.

It went better than expected. Since 20th December, I pushed out whooping 14,5 chapters at even more scary 42.000 words. I needed 32 hours of “work time” to do that. I don’t think that any other writing rush was this strong, and that includes when I was heavily procrastinating my bachelor’s thesis back in April 2016.

Well, now to where a problem new to me arose: I casually returned home half an hour after midnight on 1st, took a shower and went to sleep. More like I went to wait for sleep that did not come. My mind was constantly whirling, thinking about the story and what comes next. In the end, I managed to fall asleep around 3:00. Maybe seven hours of writing without anything else than toiler breaks were not as good idea as it looked at first…

…but I never learn, do I? I was writing a bit more yesterday (I think it was some 4-5 hrs) and even though I went to sleep at my usual time, I was still twisting around in my bed until I guess 1:30.

It’s great feeling to write and knowing that it keeps going, but I feel like my brain needed several hours to, in computer terms, terminate all the background processes related to it and finally shut down.

I hope I’ll avoid that today, though who knows. Today I added four more hours and 2,5 chapters to make the final count mentioned above. I plan to take a week of break from writing, partially because I have an exam the next week, but it’s not like I was ever good in forcing myself to NOT do something that brings me joy.

New year is coming and with it hopefully some new places to visit and new books to read. I’ll now focus on the book-ish part. For start, I’ve decided to set my 2018 reading challenge on Goodreads at the same 25 books per year as in 2017. 25 because it’s between 2 books/month (24) and one book per two weeks (26), and because number ending in 5 or 0 looks better in any case.

As for what I know will be in my 2018 reads, much of it is still unclear. I know that there will be pieces that just grab my attention on the way. I know there will be re-reads of things I liked before the next sequel comes out. And there will be some things that were sitting on my list of potential reads.