In April, I first ventured into the waters (more like open space, huh?) of self-published Sci-Fi by reading M. Van’s Recall (review). Now, half a year later, I noticed the second book came out recently and went for it. This review will probably be quite short, as is the book. 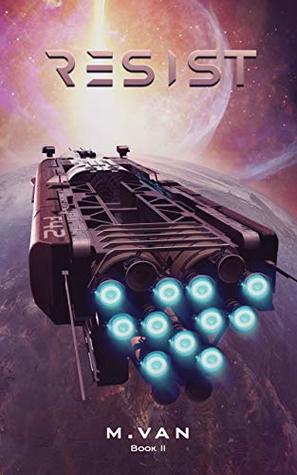 Resist follows shortly after the events of Recall. With the leadership of the resistance entering a cease-fire with Sulos, the rebels decided to take the matters into their own hands – and that’s where the first book ended.

Knowing that Sulos needs power generators for his plan and that those are manned by mind-controlled workers, the rebels decide to take those by force with the goals being not only freeing the workers but also deprive Sulos of power that he would eventually need for his wormhole generator. It also gave them a chance to find allies among the power plant workers.

While taking the first power plant goes well, the second one is much tougher and all hell breaks loose. Recovering from a failed plan is made worse by the unmended differences between the characters caused by Maece’s decision to infiltrate the ArtRep and letting others believe she was dead for two years.

At this stressed moment, the power plant workers approach these rebels and eventually it gives way to a daring and extremely dangerous plan that, at first glance, looks like a double suicide mission.

Unfortunately, I have to cut it here to avoid spoilers. The book actually only takes care of the first part of this plan and the second part will be covered in the third book.

Despite being a good read, I  am slightly disappointed by how short it is and that I’ll probably have to wait another year for the finale. Maybe I am affected by the fact that most of my recent reads were in the 500-750 page range.

One thought on “Book review: Resist by M. Van”