Seventh day, the grand finale. With some 127 km already walked in the previous six days, it was surely to be tough goodbye to the mountains. The plan was to get to the fourth highest peak, ‘Baníkov’, and if everything goes well, continue through the ridge through ‘Hrubá kopa’ and ‘Tri kopy’ on what is one of the most dangerous trails in this location with steep drops and exposed rocks all over the place. 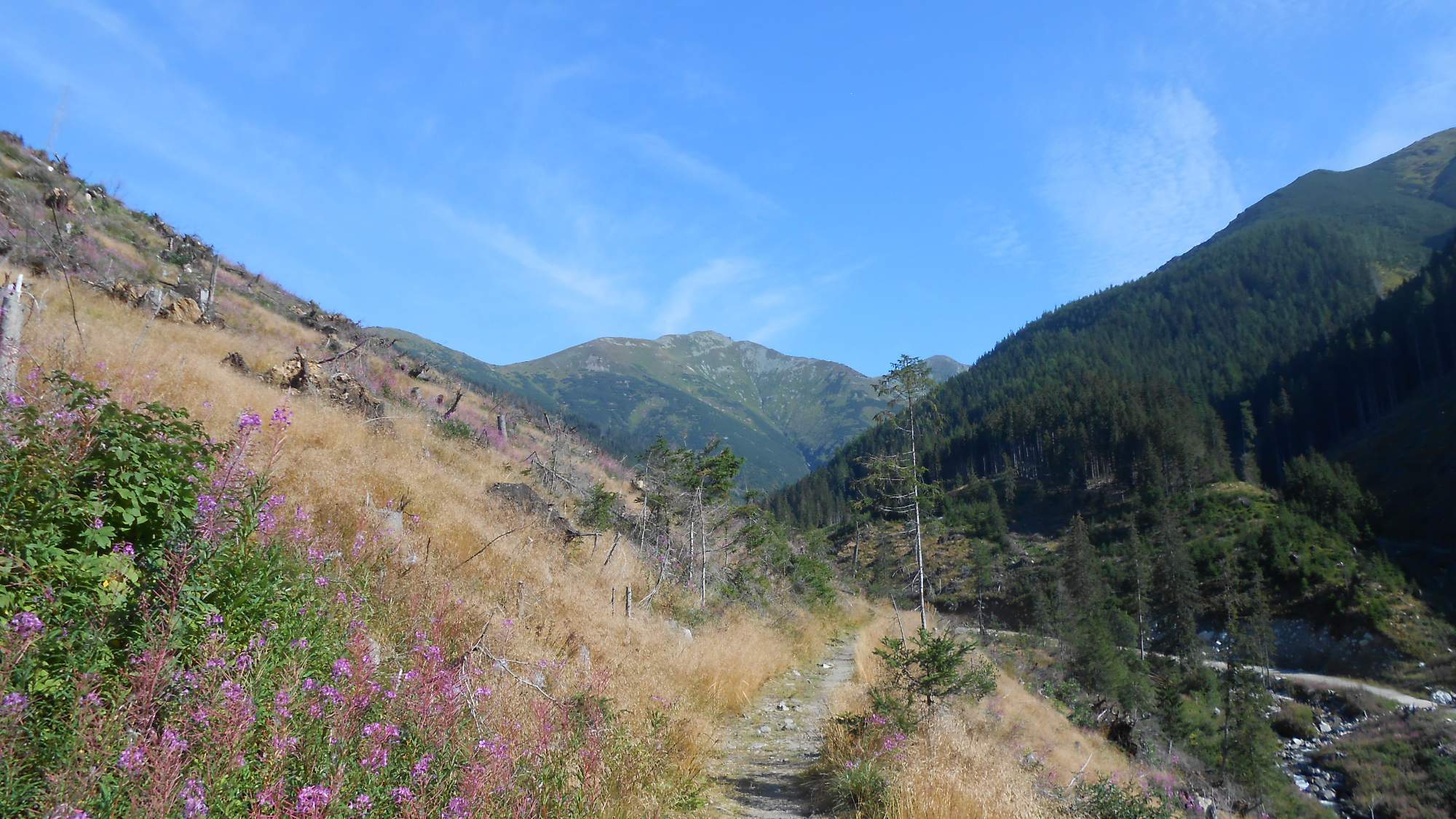 Valley in the morning

I was not planning to go all out and took a relaxed pace through the long valley. It’s quite closed, so GPS signal was very bad (visible on the map below) but otherwise it was nice start. I found a few mushrooms as well, but with the difficulty ahead of me, let them be, pointing them out to others that were on easier hikes. 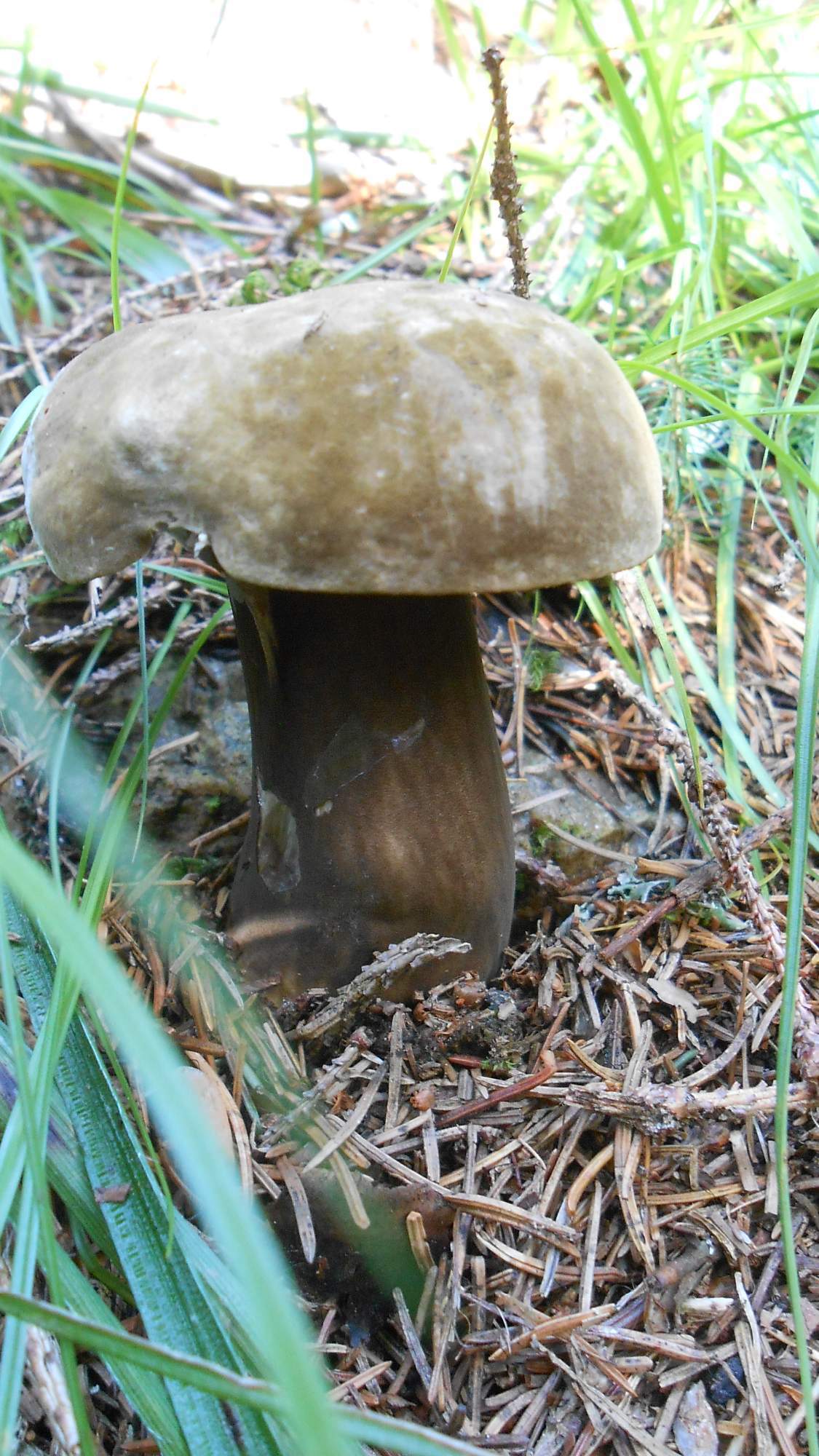 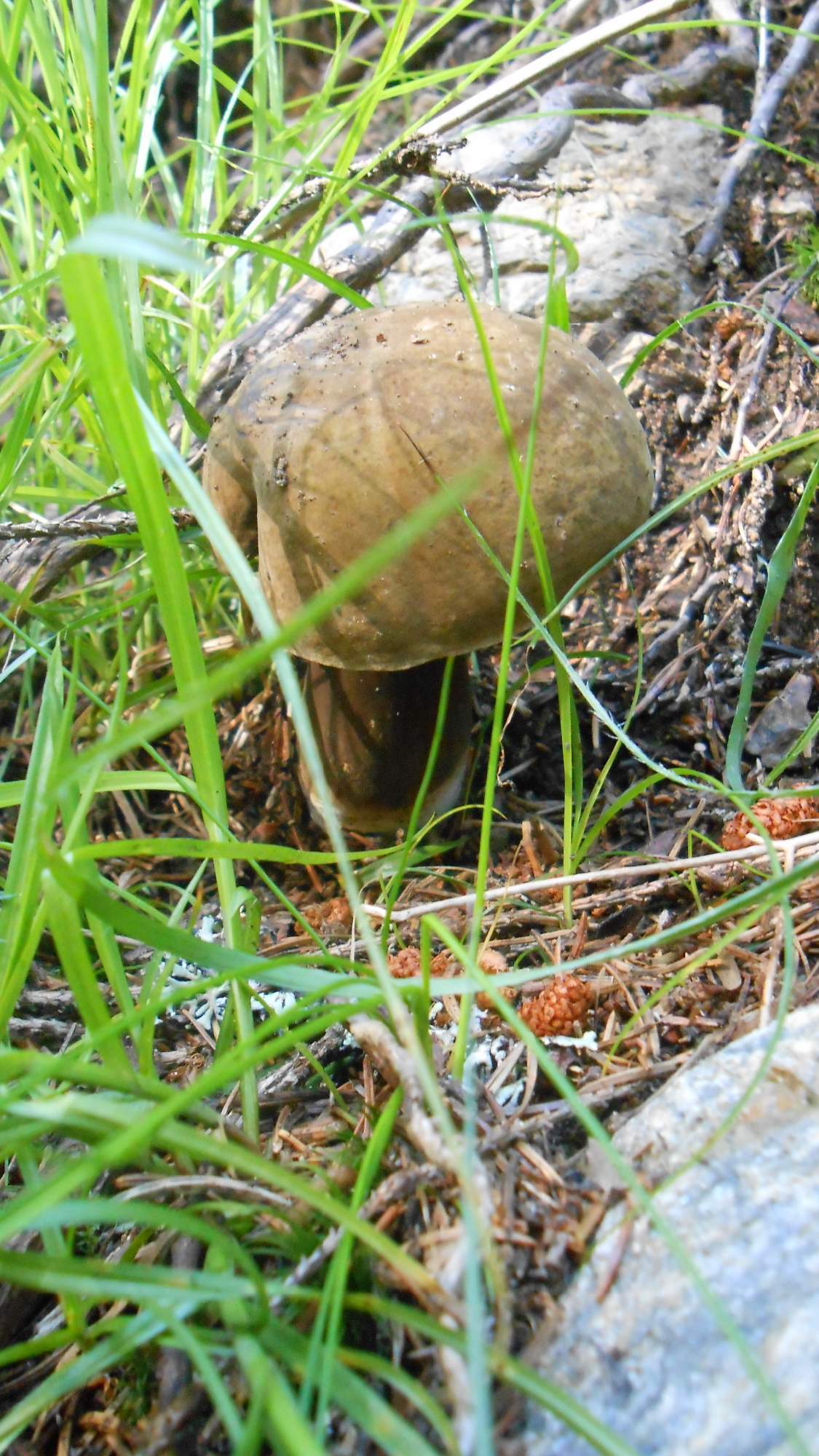 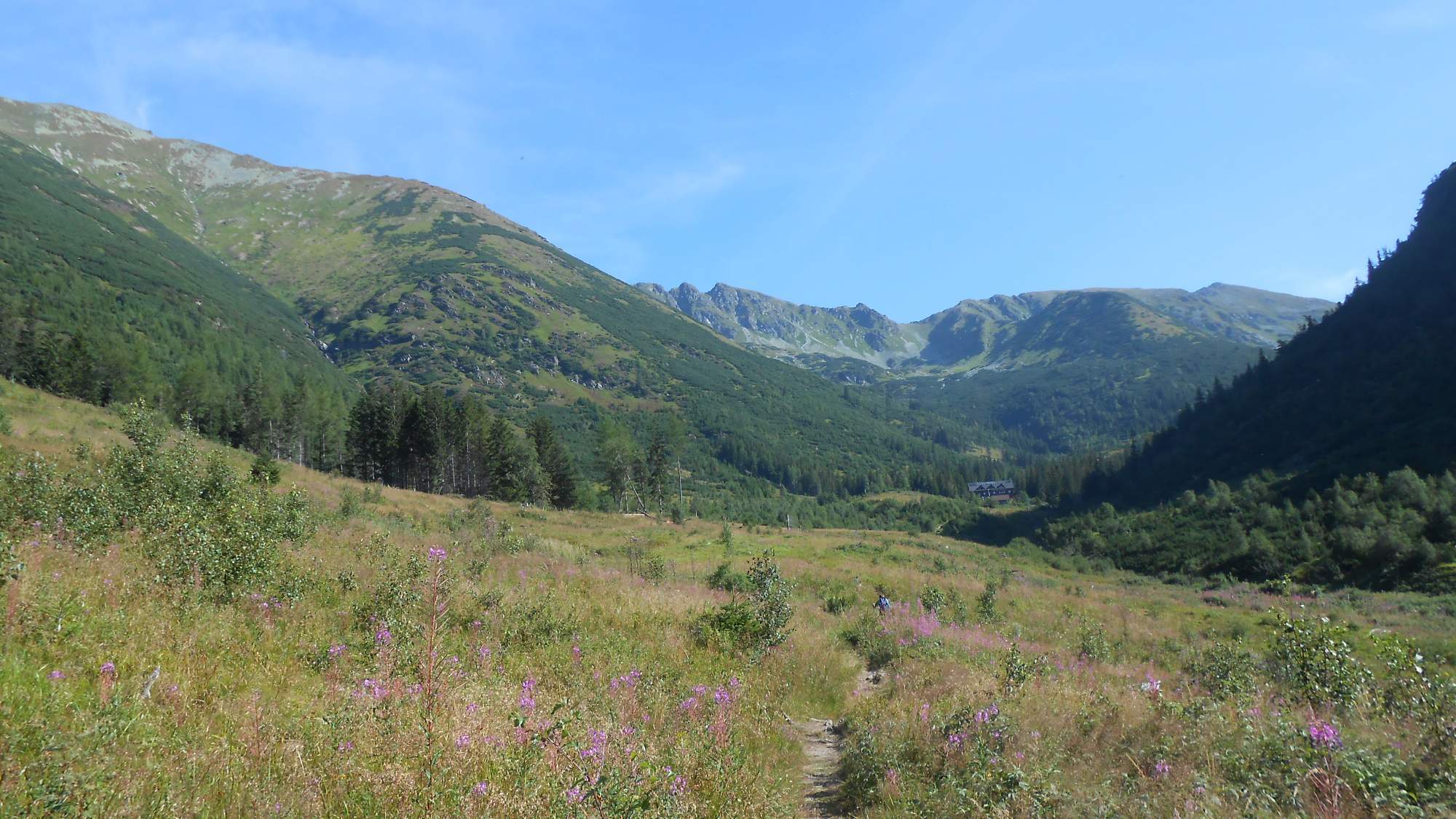 Wider portion of the valley, chalet faintly visible in the right side

Eventually, I reached the chalet and to my surprise, caught up with the fastest group. In the few minutes of their remaining break, I decided to join them at least during the ascent, if I am able to keep up as doubts were starting to pile up – my preparation this year was not really good. It ended up the usual way as controlling my speed is not something I would be good in and shortly after the waterfall ended up being the head of our group. 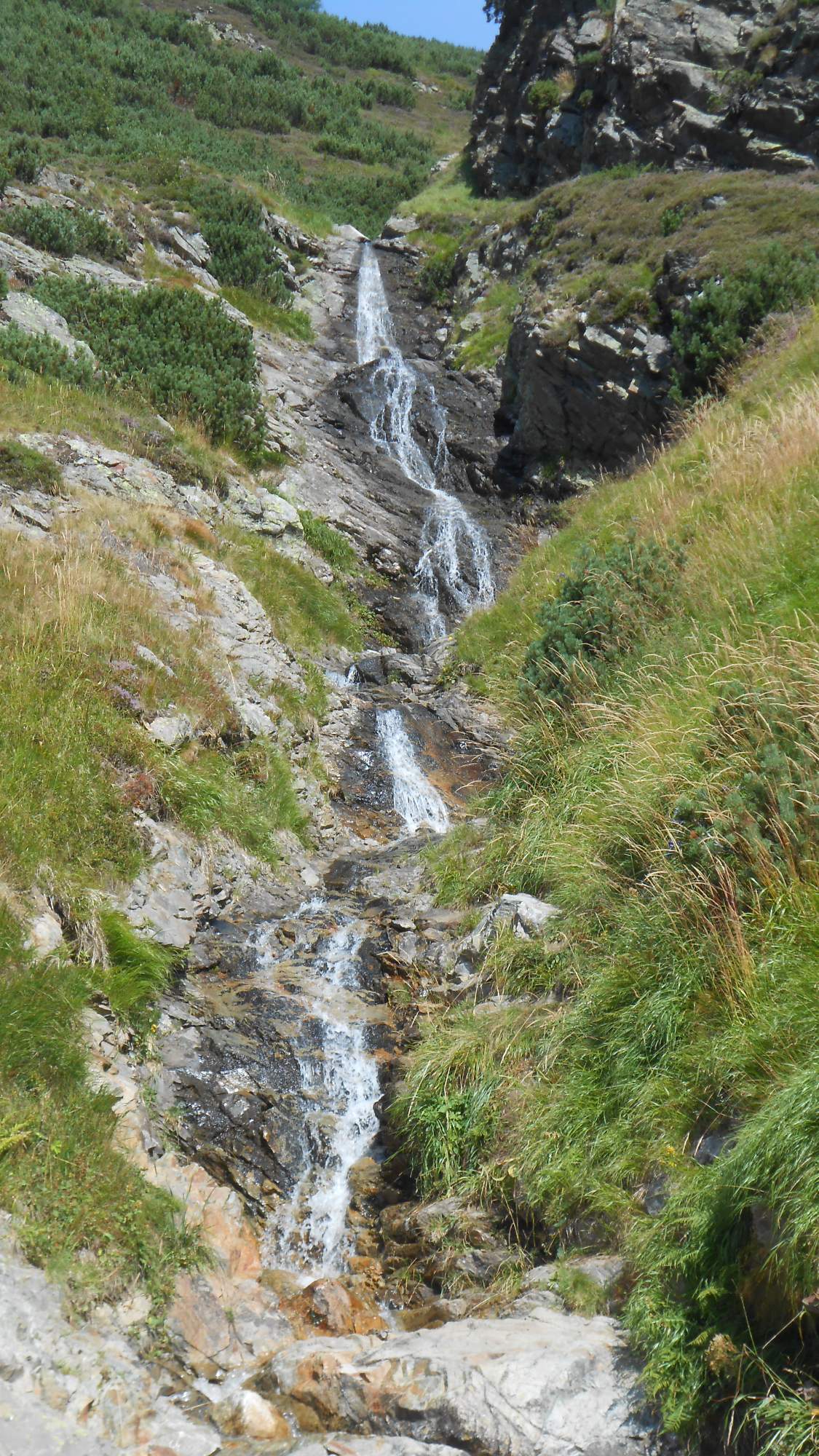 From there on, the path zigzagged in sharp ascension on the left (from my PoV), or rather, west slopes of the valley to the pass ‘Jalovecké sedlo’ where we took some time to refresh ourselves and let the breeze dry our clothes a bit. 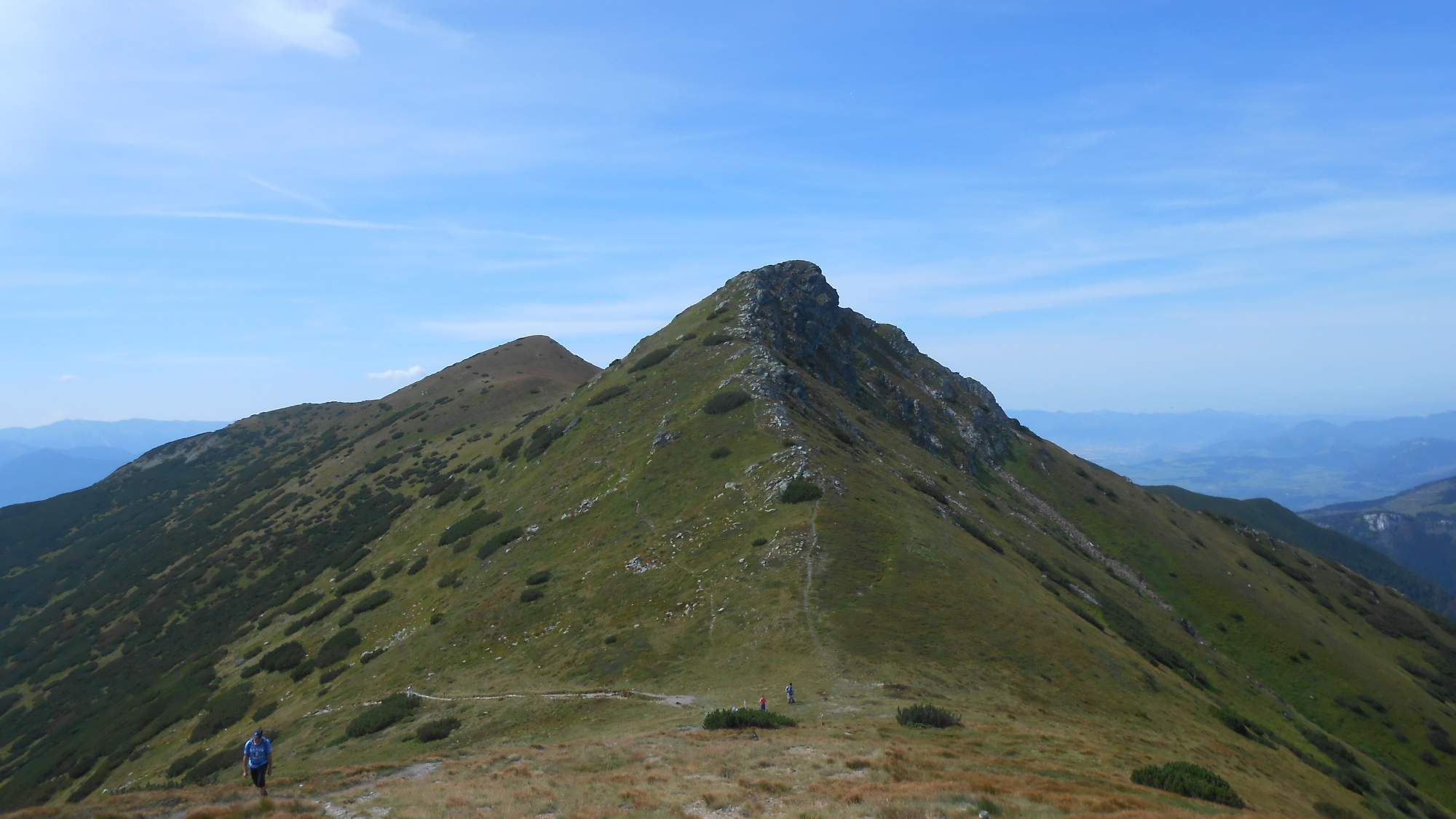 Look at the pass where we rested

From there the path was no longer zigzagging, instead being straigth up on the first subpeak and gradually turning into rocky path after. Weather decided to give us nice farewell and the lookouts were better than most of the usual days and to my joy I could see ‘Vel’ký Rozsutec’ even though not well enough for a photo (I wrote about my obsession with that peak a few weeks ago). 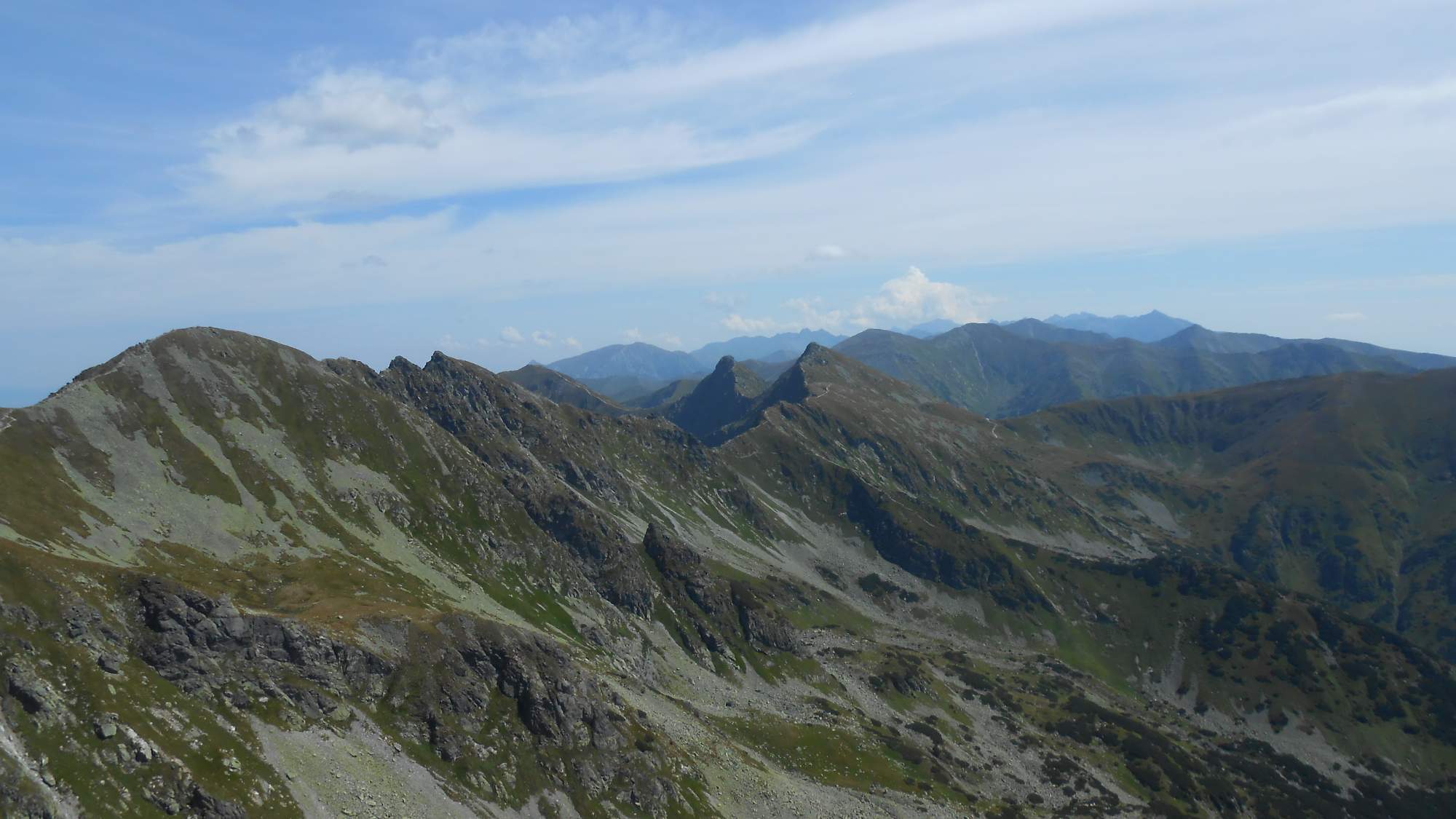 Eventually I ascended the ‘Jalovecký Príslop’ peak at 2142 meter. The peak had several meteorological gizmos on it and I presumed it was to help warn the chalet in case the weather would favour avalanches. Standing on this pre-peak was probably the last easy step of the next 3 hours at least.

At 11:55, I reached the ‘Baníkov’ peak with the rest of our small group arriving in the next 20 minutes. Now comes a fun fact: hardcore fans of FC Baník Ostrava, Czech football club, proclaimed the peak their sacred mountain. Being from the same region and having some fans in the group, we originally considered singing some of their songs on the peak, but found ourselves lacking the will to do it, being thirsty, hungry and overheating. 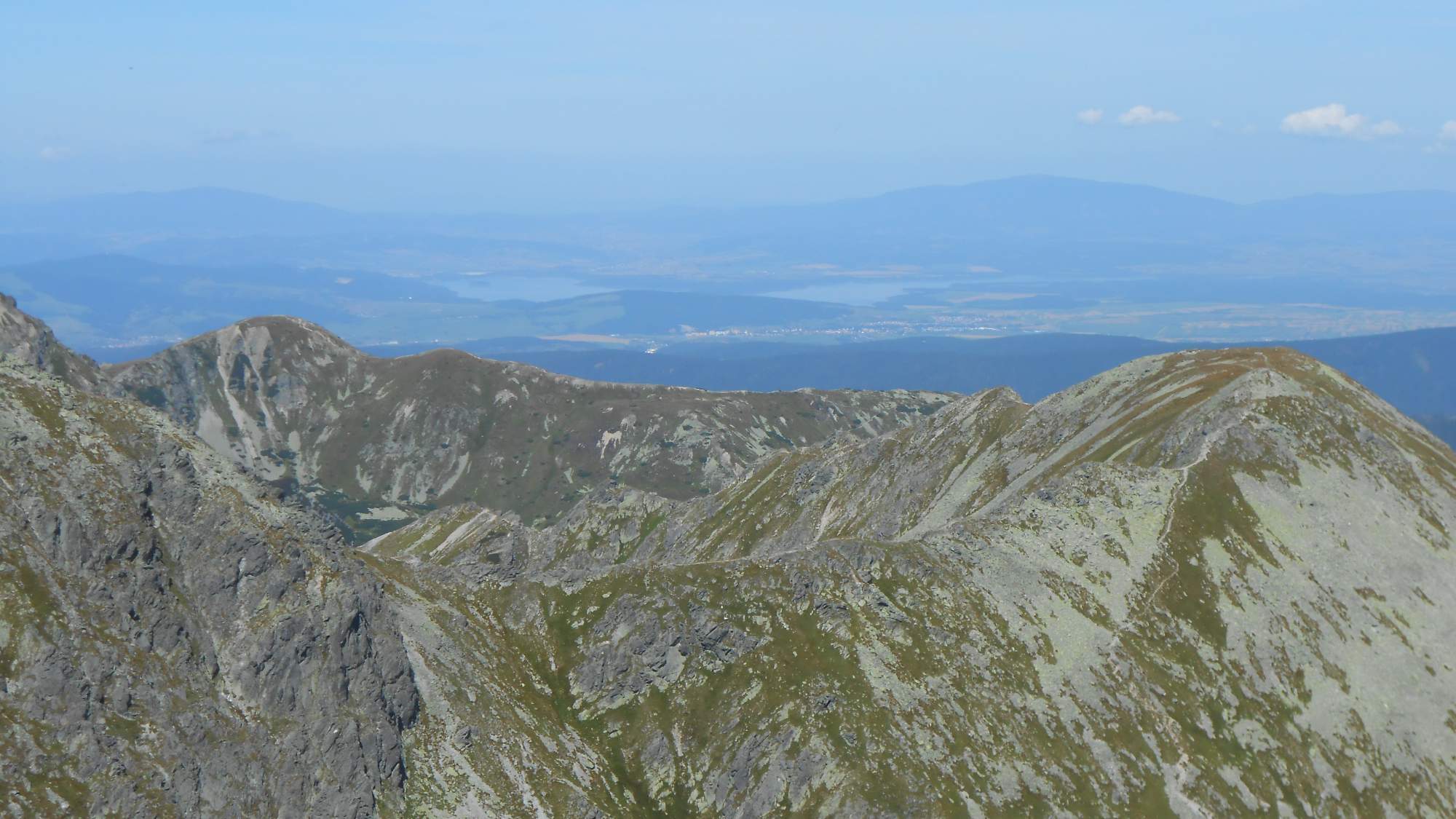 Eventually, I decided that I should be able to continue instead of retreating an at 12:35 we set out. The path was an actual path for maybe fifty meters, then it turned into a mixture of climbing, crawling, walking and anything between, based on what the mountains demanded. Descent from ‘Baníkov’ was probably the toughest place. Some 850 meters took us 35 minutes to cover in the multitude of possible movement styles with occasional look to the abyss below me, some 500+ meters deep. The slow passages at least allowed us to take pictures, both of the landscape and of each other dealing with the dangers of the trail. 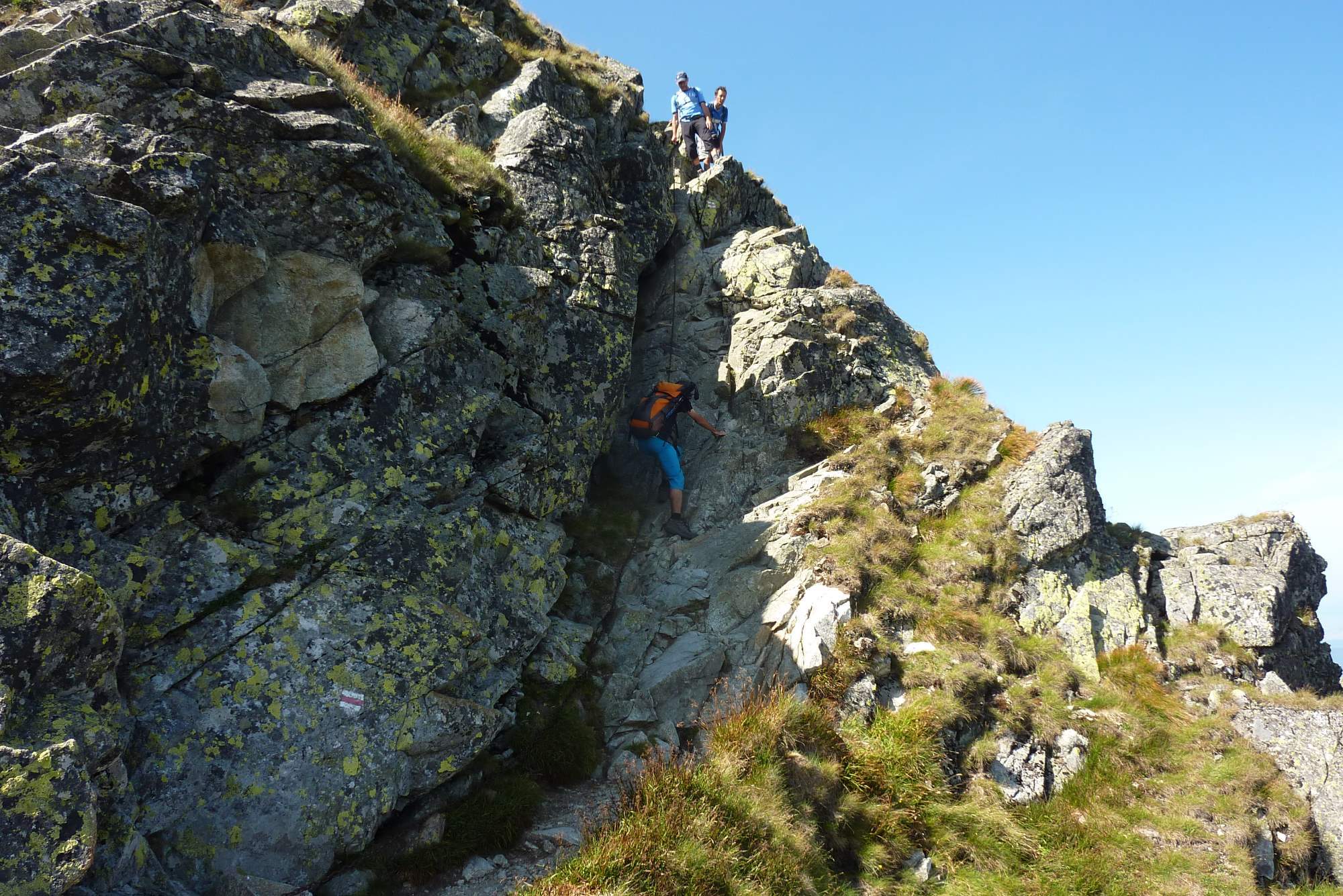 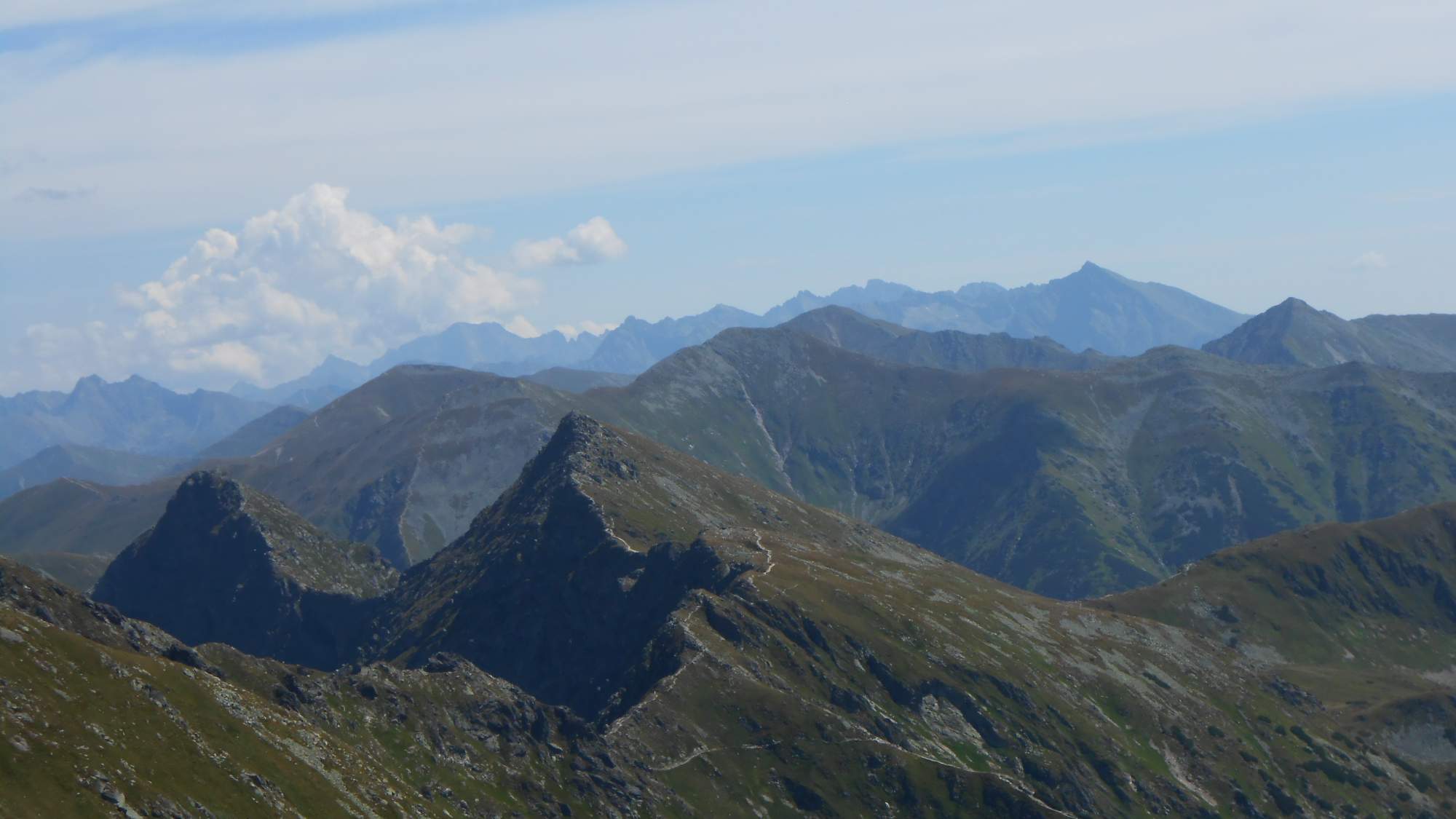 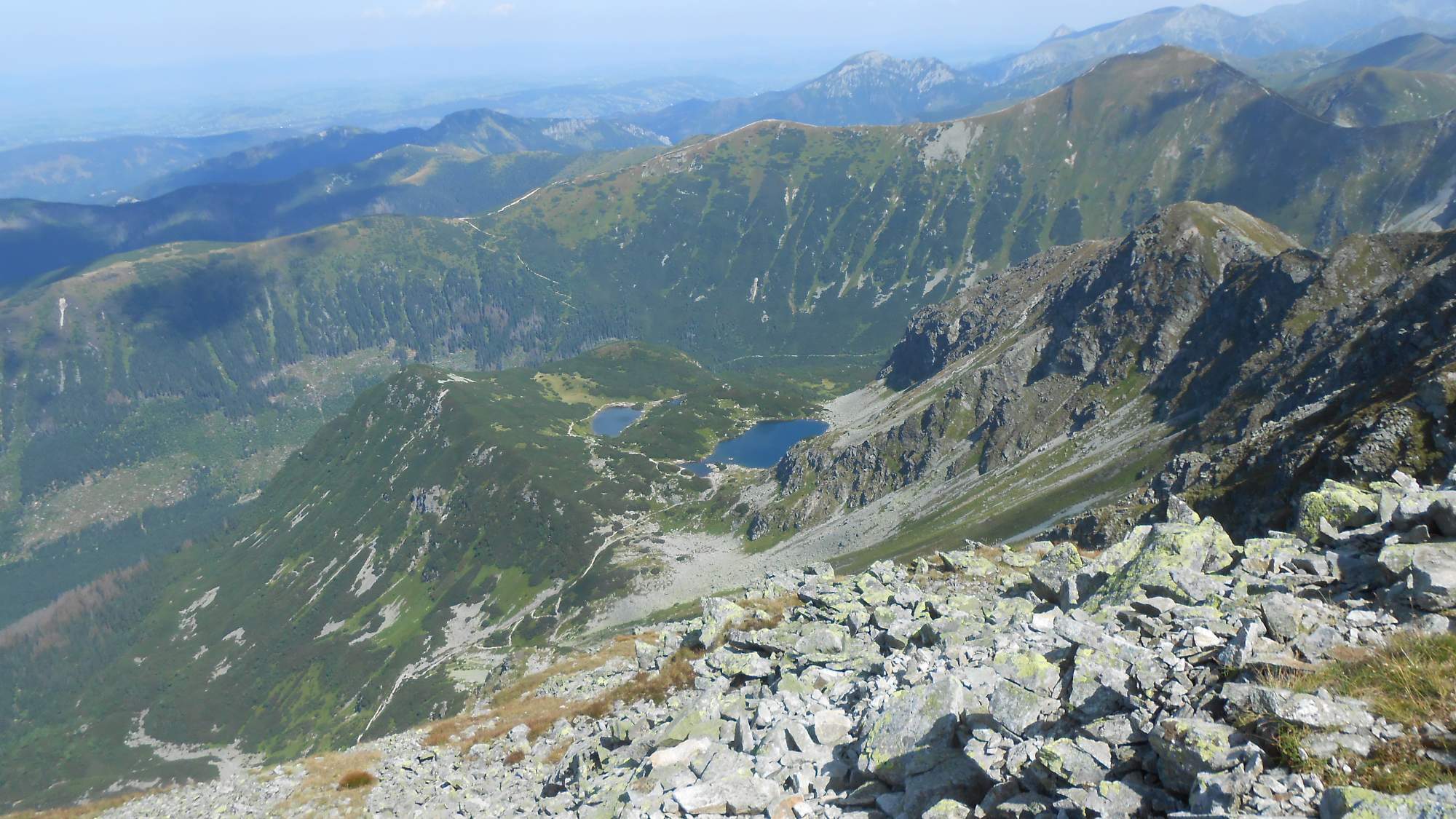 I said that descent from ‘Baníkov’ was the toughest part, right? Well, I thought so initially, but then changed my mind. The really tough part is at ‘Tri kopy’ – three jagged peaks close to one another (elevations 2154, 2152 and 2136 in order of reaching them) with some steep drops and ascensions between them. It is here where some of the trickiest parts were. 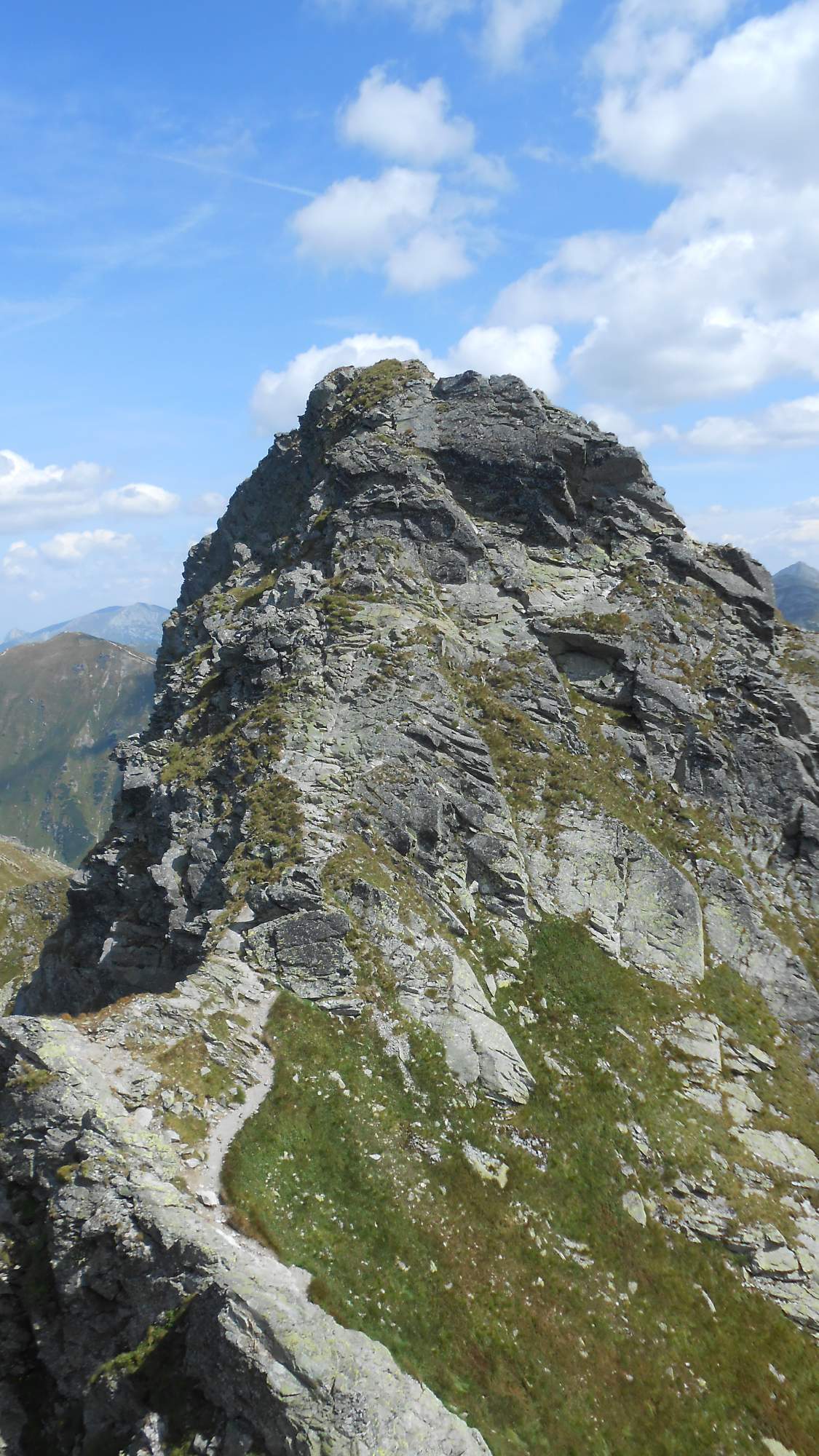 Can you find the path? 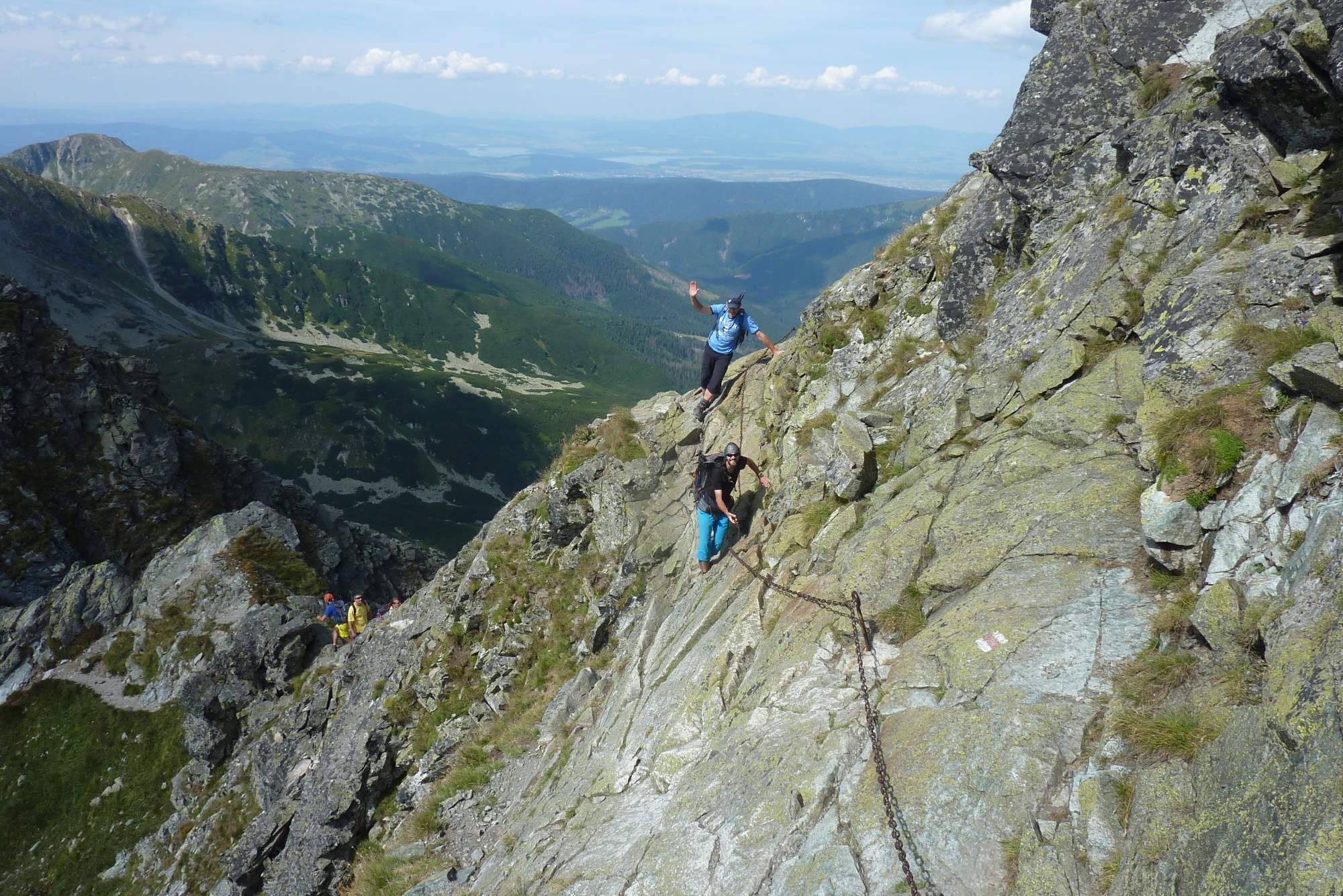 It was in this section where I often had to use my body to the fullest, use my full “wingspan” as I sometimes say. It was there when the photo below was taken. “Stop, I have to take a pic, you look like a spiderman,” he said. Bah, as if I knew where to put my hand next. I had my hands fully spread and wondered where the hell are my legs supposed to go on that ledge.

Can I find the path?

I must say, if not for the harsh terrain, it would be very nice place to enjoy. The sights were great, weather almost perfect (but too hot) and not too many people, probably both because of difficulty and being a Friday. Descent from the last peak was pleasant path compared to the previous two hours. 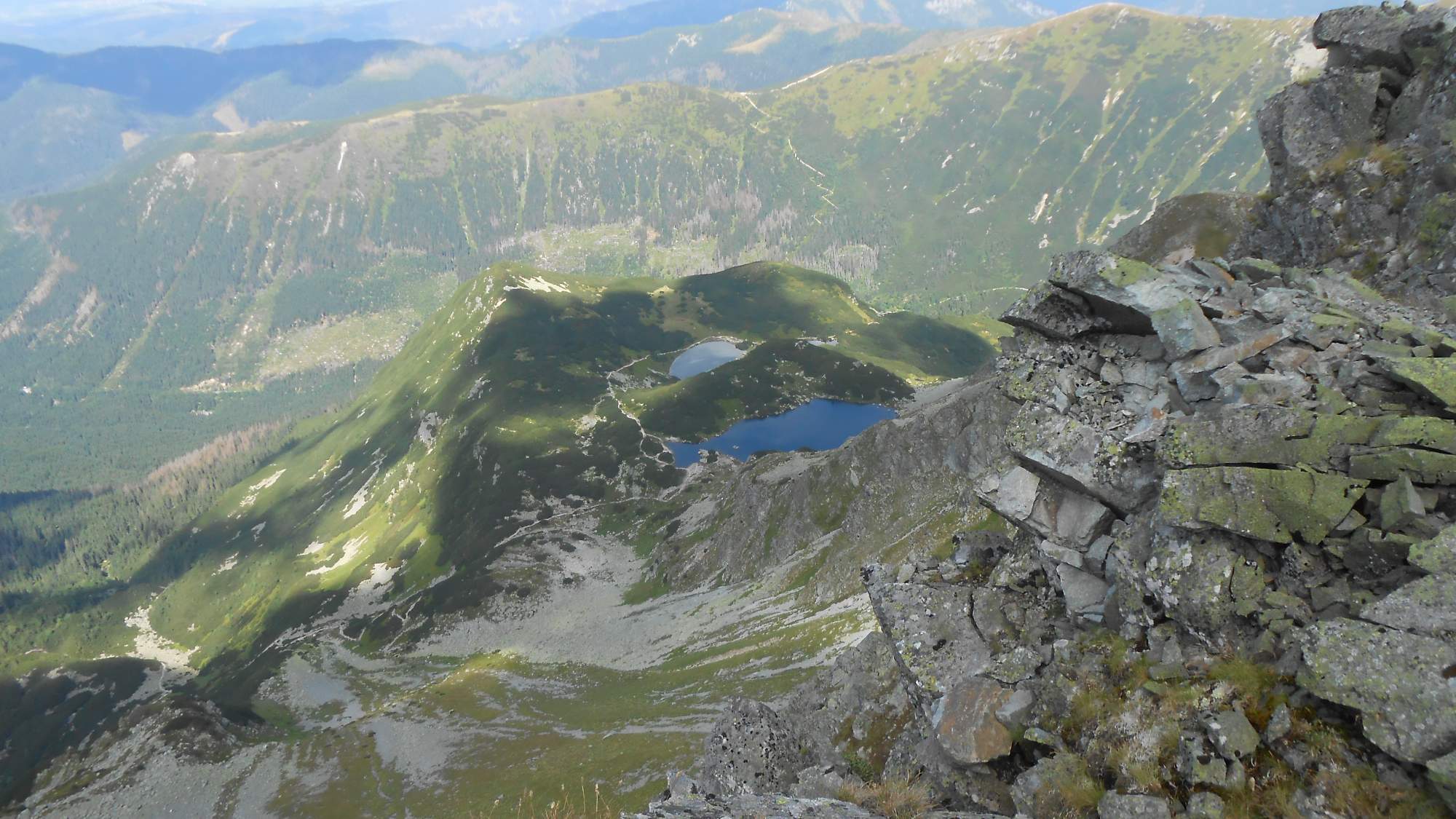 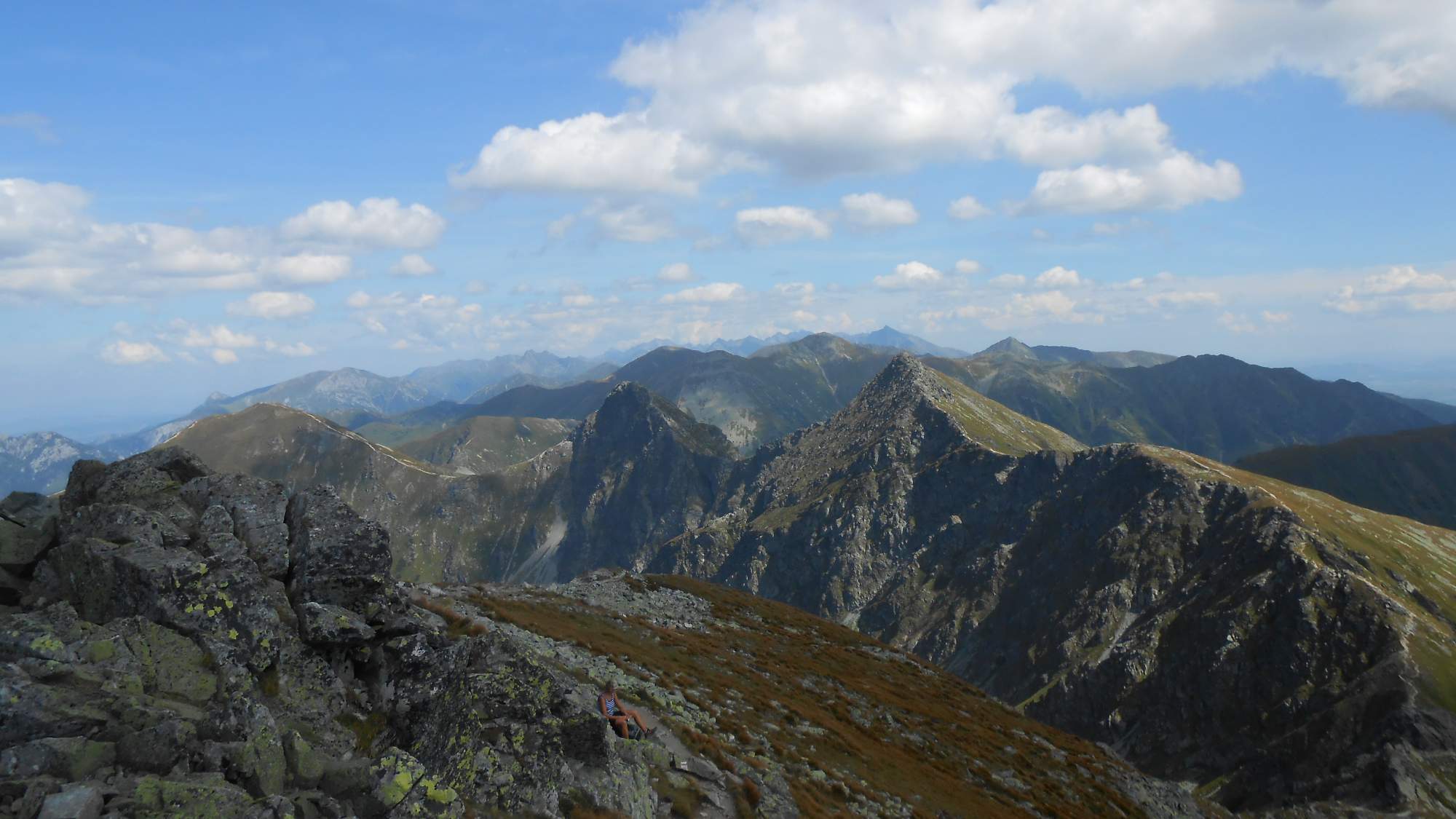 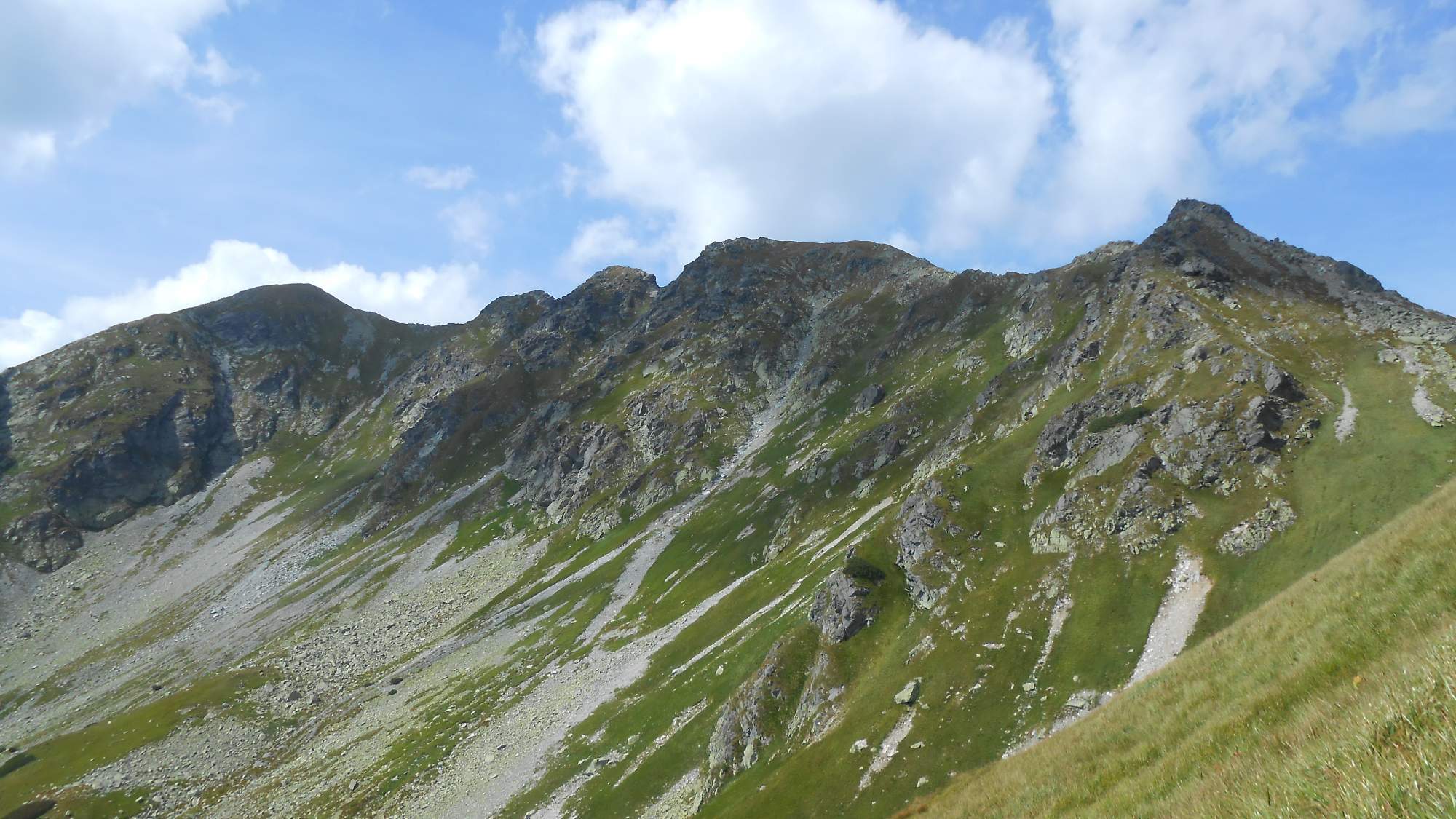 At the ‘Smutné sedlo’ pass, we left the main ridge and turned back to the valley where we started. At 15:25, I was back at the chalet, surprising many others with the early return, and after a short break and bit of talk with those who took easier route, I descended the valley swiftly.

I was tired, I started having strong cramps in my left leg again during the valley descent as I set up mechanical pace at 6,5 km/h on the shabby asphalt and then rested and chatted with some of the others and the bus driver when I reached the parking spot. It was awesome farewell to the mountains. The epilogue elsewhere that would come tomorrow would change nothing on it.

Google map (inaccurate in the valley due to bad signal):

Note: photos with me as the main point are taken by friends and thus are not mine. My thanks to them for both taking the pictures and sharing them with me.