This is one of the first books I’ve read after buying Kindle in 2016. One of my most favorite, still. And the first I’ve re-read for the third time already with the third book coming out in a matter of days. It’s a bit strange to write a review for it now. Anyway, here it comes. 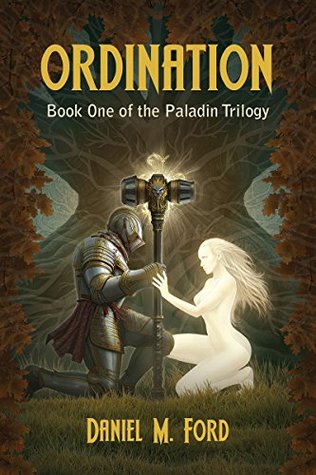 Ordination is a fantasy happening in a war-torn world. Forty (or so) years, barons and lords fight for a land that is without a king in a struggle without an end in sight. While they are busy trying to push their borders by what is barely a significant amount, people suffer and the land is ravaged by plundering warbands, slavers, and greedy self-proclaimed nobles that benefit from both.

Allystaire spent (by his own words) 21 years in those wars and saw most (if not all) of the bad things that can happen in such times. The book starts when he leaves his lord into a self-imposed exile for reasons that are only revealed over time, riding away with no goal only to arrive at the ruins of a village razed and burned down by a band of slavers. Finding only one survivor, a stubborn girl named Mol, he’s talked into trying to save the people the slavers took away.

Reaching Bend, a city infested by lawless scum, he eventually smashes his way to the folk’s freedom. On the way, he meets Idgen Marte, warrior woman full of curiosity and witty remarks in addition to her sword skills. With the people freed and revealing the corruption in Bend, Allystaire is ordained to be a paladin of a forgotten goddess, chosen to bring hope and justice for the poor back to the world – by violent swings of his hammer, if necessary.

With (most of) Mol’s people rescued and their village rebuilt, Allystaire and Idgen Marte leave to find two more recruits for the goddess ‘holy five’, trying their best to help village folk on their way and hoping to get some answers at Londray where Allystaire is to meet a man from his past.

They also find the fourth member – a dwarf named Torvul – but I won’t say anything to that for spoiler reasons.

As for the characters, they all have different strengths. Allystaire uses his knowledge of warfare to his full benefit, to the point he sometimes comments it in Terminator-like style. There’s no subtlety in his approach as he smashes his way through whatever stands in his way, knowing that he might die trying. Idgen Marte is the exact opposite, fighting with subtlety and using her own unique skill to complement Allystaire’s straightforwardness.

“If the only plan you can ever come up with is walk straight at ‘em and count on pounding ‘em into jelly, well, there’d be a lot of dwarfish generals who’d approve of the way you think. And every single freezin’ one of ‘em is dead.” – Torvul about Allystaire’s fighting style.

All of the characters have their own secrets from the past, some of which are hinted and some of which I hope will be shared later.

“I would not call it playing at war, dwarf,” Allystaire remarked coolly.

“No? Then what would you call it, spending twenty, thirty years fighting a war nobody can win over a crown nobody seems to want.”

“I agree it is senseless; that does not make it any less serious for the men and women and children who suffer and die.”

I’ll go to reading the second book very soon so I can jump right into the third when it comes out.

I was somewhere between 95% and 100%, eventually going for the higher one due to fond memories of it. Maybe the fact that it’s a book with the main character being almost a veteran that makes it different. About seeing military fantasy with the eyes of a character that enlisted as a young boy (Allystaire states he was 15 in his first battle) and has long lost his illusions of glory and fame. All that he has left is a hammer that will make those in his way rest in pieces and countless scars that will forever remind him of the vain struggle he gave over twenty years of his life.

One thought on “Book review: Ordination”