After two Sci-Fi books (Jurrasic Park and Resist), I got to read a book that is some kind of a mix of Sci-Fi and Fantasy. Another step into the unknown for me – and one that worked for me. 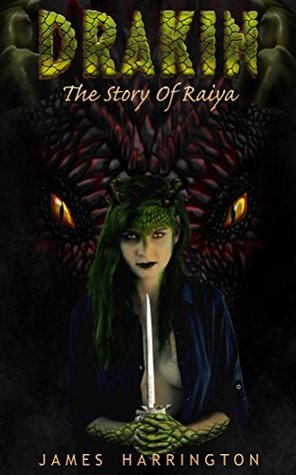 The hardest thing for me is to categorize this book. If I wanted to try a bit lighthearted approach, I’d say: imagine Roland Emerich would make Independence Day with dragons instead of aliens – and, logically, impenetrable dragonscales instead of shielded spaceship fighters. And that instead of David Levinson, there’s a half-human, half-dragon girl.

That’s this book in a nutshell.

And in this style, it begins. A meteor crashes on New York, carrying five elder dragons that unleash hell on Earth.

Fast forward some twenty years. Rayia, turned outcast because of her strange appearance, manages to save Jagger,  a soldier on patrol, from being killed by a dragon – and it goes places for them both since then.

Seeing her hungry, Jagger offers to take her to his hometown to get her something to eat as a thanks. A child unmasks her and declares her a freak, casuing them to be thrown away from the restaurant. Jagger takes her home, still unwilling to let her be kicked out of the city before the night. In the morning, dragons attack again. The citizens blaming Raiya, she is forced to leave, along with Jagger who refuses to let her go alone.

Eventually, they come across a group of scavengers and learn about a mad doctor that could explain the mystery of Rayia’s origins – only to be shown to be the worst kind of mad scientist willing to use her as test subject and eventually causing Rayia and Jagger to break out.

At this point, I’ll not say much for spoiler reasons. It goes worse before it gets better and the final fight is really nice. Plus, I had more Independence day feelings from some parts. What I should mention that it was nice to see Rayia’s emotional reactions to the mid-part of the story.

What was a pity were some formatting issues I saw in the book as well as a few cases of missing words/typos but that’s not something I’d factor into my final rating. Anyway, it was a good read that I got through faster than I expected.

7 thoughts on “Book review: Drakin, the story of Raiya”