For my latest read, I chose something that a member of Goodreads group was mentioning being on sale. The idea seemed interesting and so I went for it, even though it was not something in the center of my attention when it comes to (sub)genres. The book is a mixture of post-apocalyptic, folklore, urban fantasy and maybe more.

What had me interesting were two things: the premise of a post-apocalyptic world that worked differently than mainstream movies – no nuclear war or zombie apocalypse. Instead, the humanity was brought down to 6 million people by experimenting with gene splicing (or something) for contraception, turning majority of the population sterile. I guess it worked far too well… 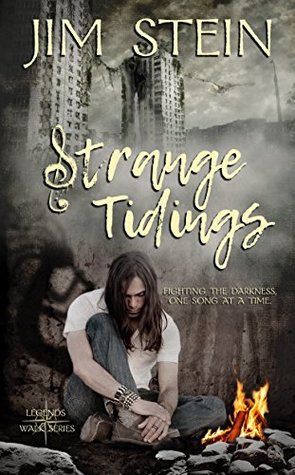 What managed to save humanity from complete extinction is a small group of people that were not affected by the experiment (or possibly immune to it) which, in case of USA, means native Americans.

The main character is a young adult with a passion for music. It seems that things could go well for him when he gets a decent job, helping a starting band with recording their debut when things go weird.

He founds himself stalked by a weird man looking like a native American and something that to him seems like some kind of owl witch, then finding his home ‘decorated’ by strips of cloth that look possibly like someone made a temporary home of a bush.

Only when his sister is taken, he gets some hint of his origins (being descendant of the native Americans) and having an affinity for strange kind of magic that manifests through his connection to music. As it tends to be, he gets minimal time to practice on it before being forced to use it as all the weird things are gaining speed around him. Fortunately, he’s not alone in the dark as the strange man gives him some tips to get him started up. That’s probably as far as I’ll go without spoilers.

Despite being a step into the dark, it was a decent read for someone who has no clue about the mythology of native Americans. As a side note: the metalhead in me was glad for some mentions of metal songs.

As usual, I am not posting the rating for books that have less than 50. The story is good, has interesting points and I generally liked it. Pacing is good, though the finale was longer than I expected. I somehow expected a bit more from the gift package Ed was given, expected the gifts having some special power.