So, after several weeks, I finally finished another book. This one took longer than expected, for reasons that were mostly irrelevant to the book. The book itself is good, yet I struggled to really get into it, for reasons I still don’t know.

Anyway, let’s get to the review itself. I’ll try to avoid significant spoilers, though the review will reveal something from the start. 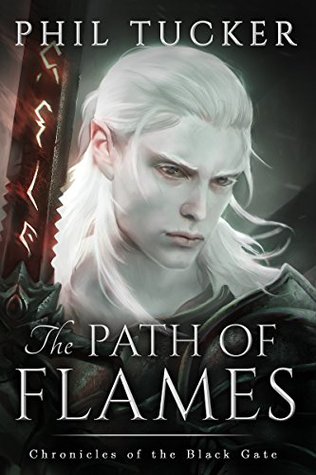 The Path of Flames starts with a battle where Asho is merely a squire of Lord Kyferin, riding to defeat their enemies. Yet, what was supposed to be a quick work of crushing their enemies turns into a slaughter.

With a bit of unexpected teamwork, Asho survives and is promoted to a knight by one of the holy warriors that were still standing. Keeping true to his promise, he returns to Kyferin’s castle to serve the Lord’s widow.

With the defeat suffered, it’s clear that the situation is dire. Lady Kyferin eventually releases Tiron, a former knight that, just like Asho and she, had some unpleasant history with Lord Kyferin.

Shortly after, the Lady’s relative takes over her home and banishes her (and those loyal enough to follow) to Mythgrafen hold, place with awful reputation, which is planned to deal with them out of sight. This plan is actually even worse, but that’s something I’ll not mention for spoiler reason. All I will say is that what is revealed there sets up for quite an ending.

There’s also the kragh substory. The kragh, massive beasts, are present as line-breaking troops in the first battle, but the substory that is followed through the book seems to be connected only through the species name as it follows a son of a chieftain on a different side of the world. This side story is interesting but feels disconnected at times and the shift to it felt sometimes strangely timed. Only by the end, a hint is given how that part connects to the larger whole, something I will again not mention for spoiler reasons.

I’ve stated in one of my earlier posts that immersion is one of the key factors for my rating. In this book, for some reason, it took longer than usual, even though I enjoyed the story. Maybe it’s because I am not into reincarnation and these things. Maybe it was something else. Still, the story is good and I will continue it, either by the prequel that is supposed to show Asho’s backstory or book two, not yet sure. It’s possible that I’ll weave something short between that – before I make the decision.

2 thoughts on “Book review: The Path of Flames”