Autumn is quite diverse season. It starts as slightly colder summer, then moves into colorful art for a while before fading to gray. And in the end, it gets a bit white as well. November, by my experience, is one of the worst months for hiking, at least here. Most of the time it’s cloudy and it lacks the color of October. In fact, those are the months I end up returning with my clothes wet and (almost) no photos taken the most, the only decent competition was April 2017. But sometimes it’s not so bad.

First, I’ll show a photo from 2015. It demonstrates perfectly how the better part of my November hikes looks like. Last hints of color on some of the trees (birches and larches look really well), with sad, gray background caused by the clouds above. That is in the better half when it’s not raining. 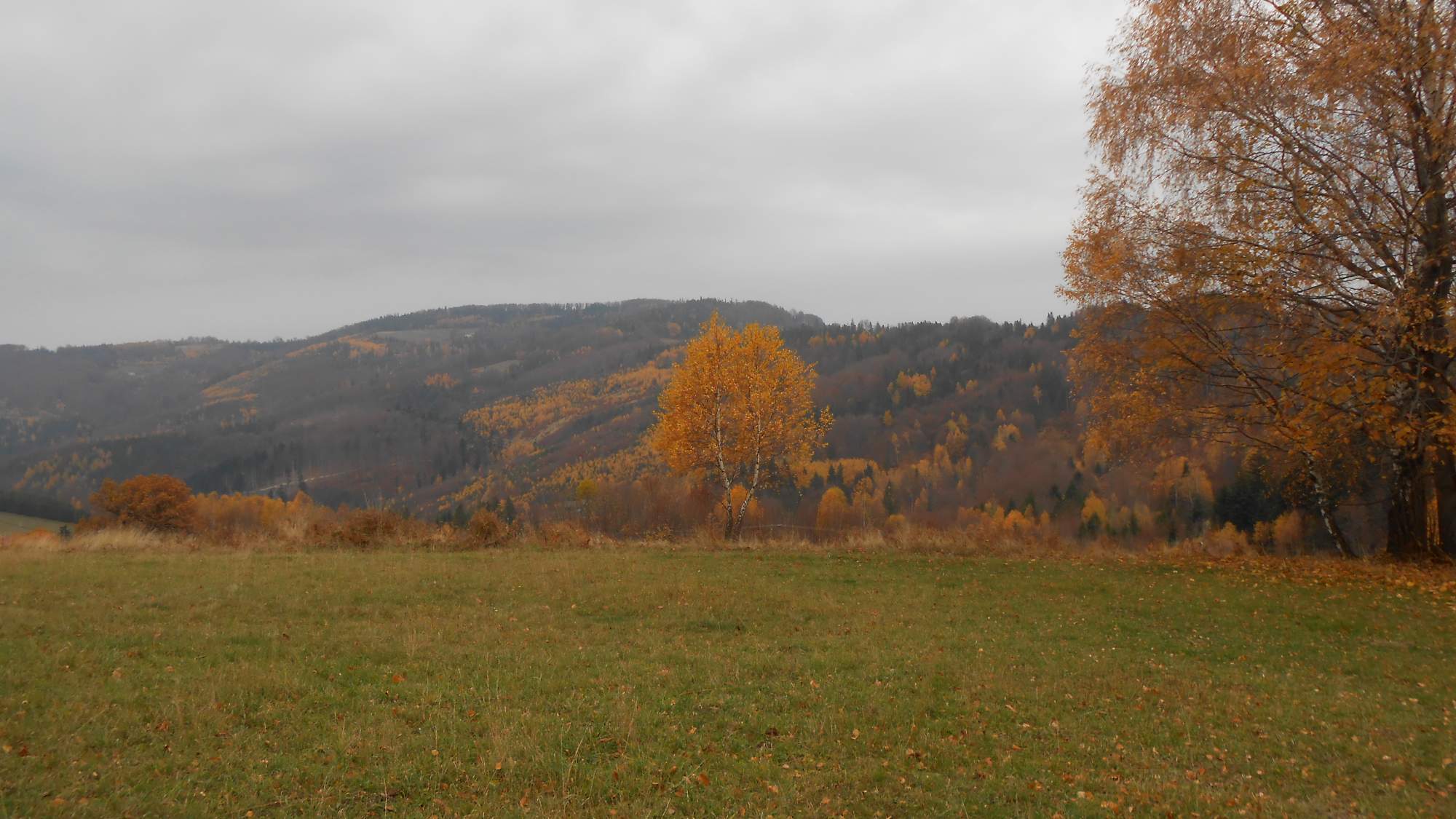 And now I’ll get to the better part. November is the month where the mountains here usually get their first snow. Not much most of the time, but it can do miracles. It can show the strange transition from colors of autumn towards winter.

Fast forward one year, November 2016. I managed to squeeze in one solo trip and as it snowed lightly the day (or two) before, it created some nice sceneries where the lower parts of the hills were still in yellow, but the peaks above in white.

Not that dark, huh? Just wait, it gets better. Now, combine the charming winter feel of forest paths with the green blueberry bushes, and you get this. 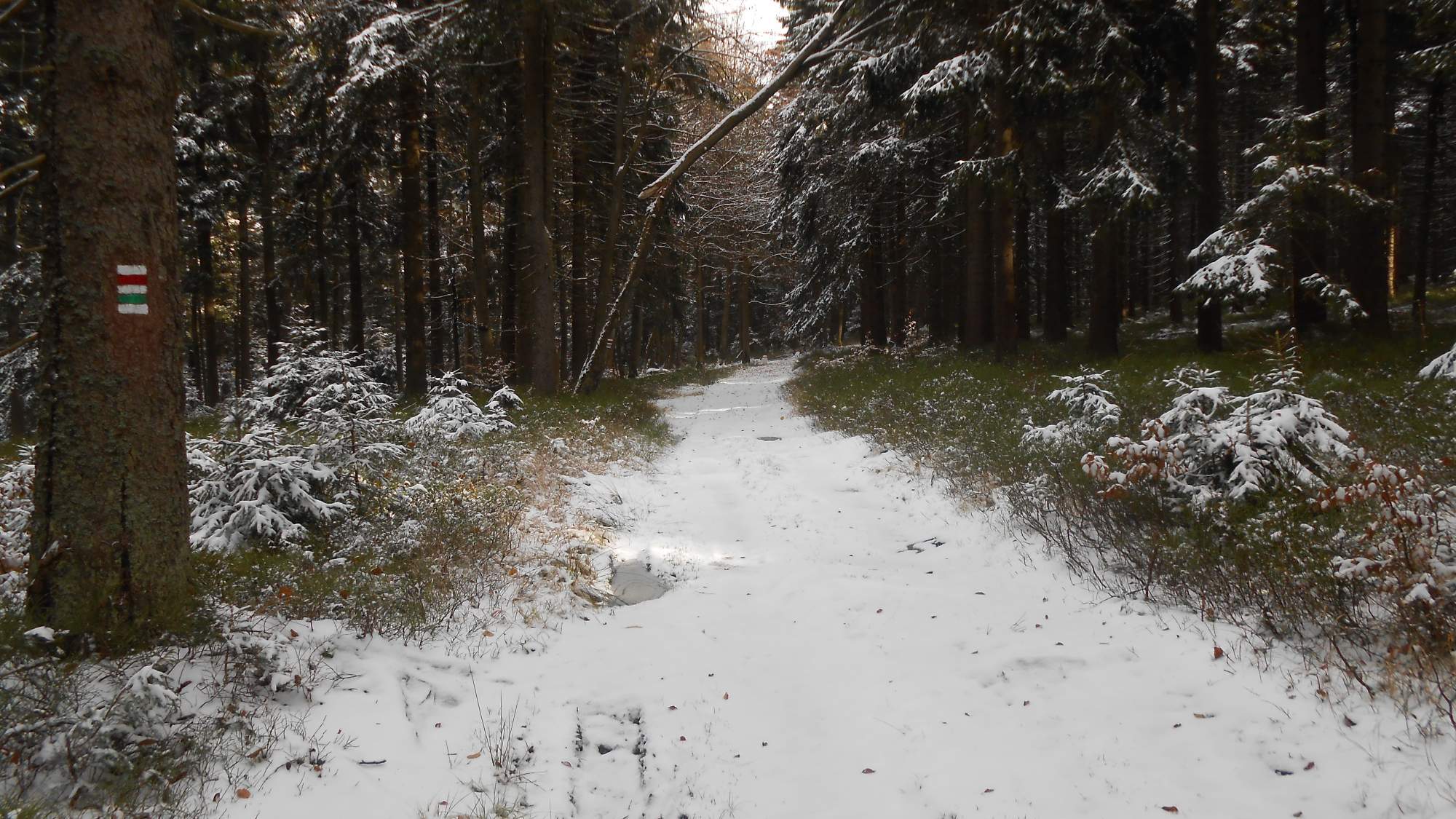 Sometimes, the change is so sudden that even the nature itself reacts slowly. Amanita muscaria is one of the most photogenic mushrooms by itself. Add a bit of snow, and you can get interesting results. 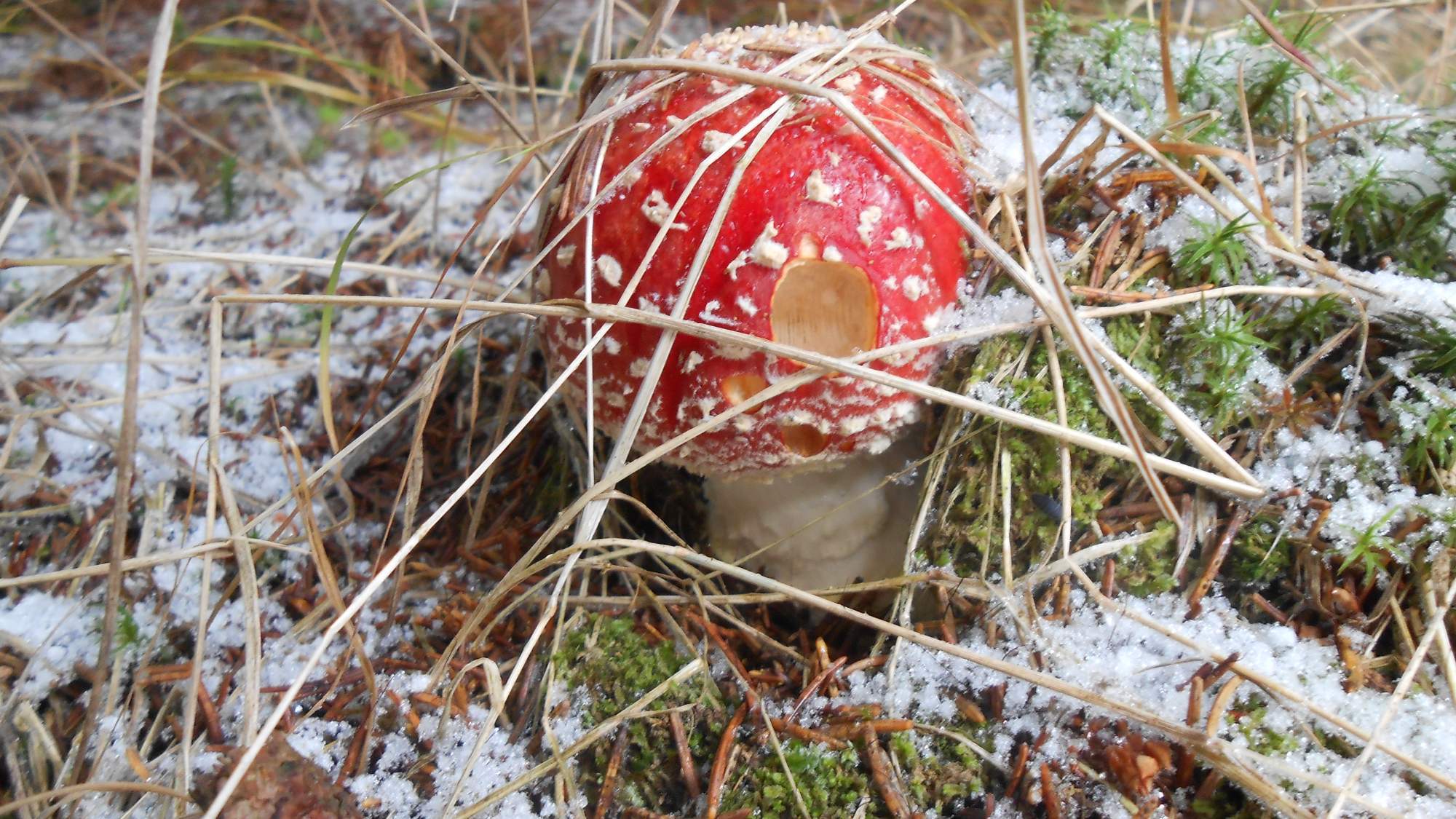 That day was very nice and relaxing walk in places that are mostly used for cycling in summer or cross-country skiing in winter as the paths are not steep, but between that, they were empty and calm.

And so I am finally getting to something recent. 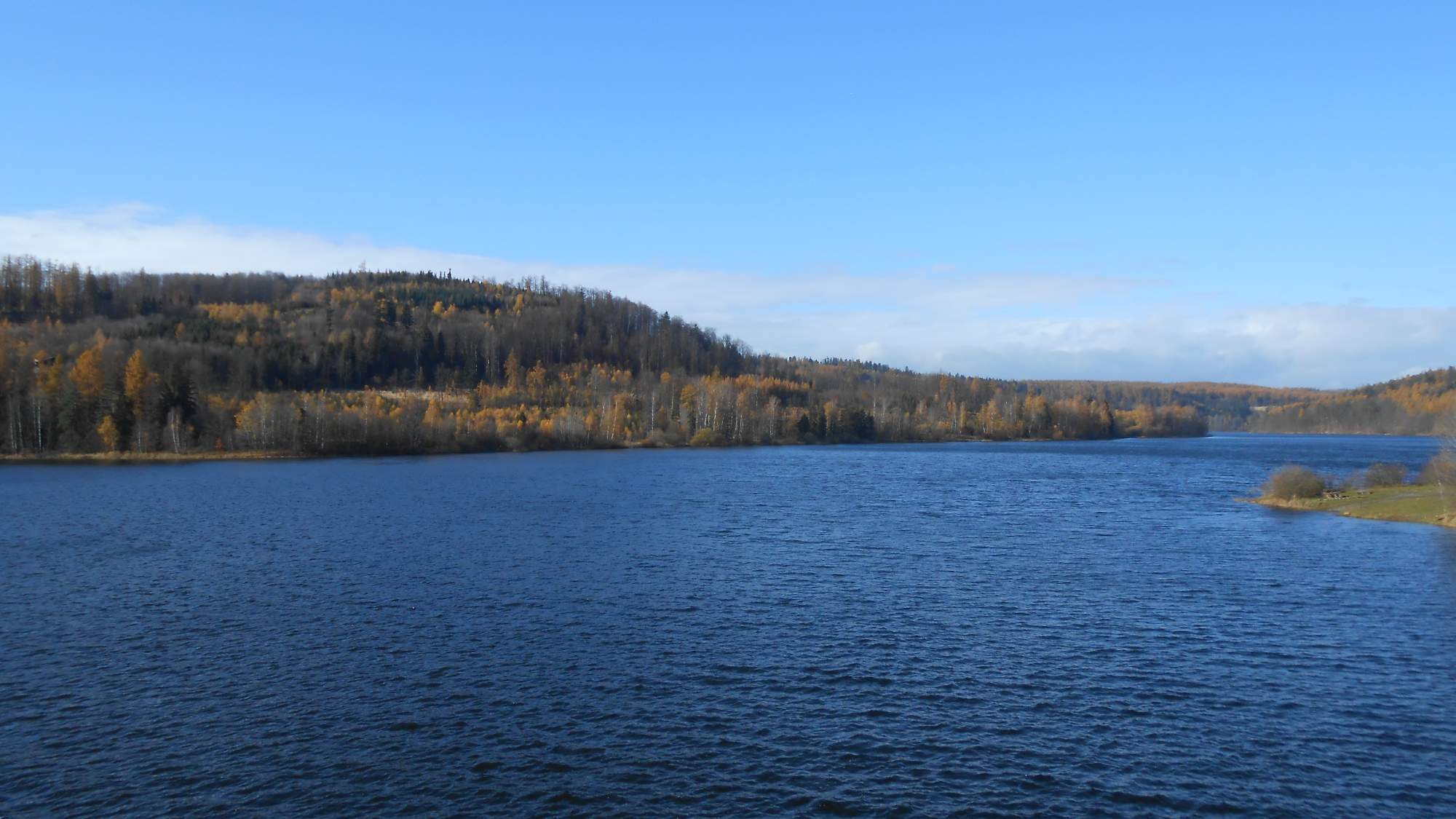 Looks almost like a summer photo right? In fact, it was quite cold, for how it looks like, more so later in the day. I am showing this, because 11.11. is by folklore the date around which the first snow usually comes (or did in past, damn global warming). Anyway, let’s move it a few more days.

While down here it was raining on that Sunday (12th), the hills got their first bit of snow. And it can really look nice. 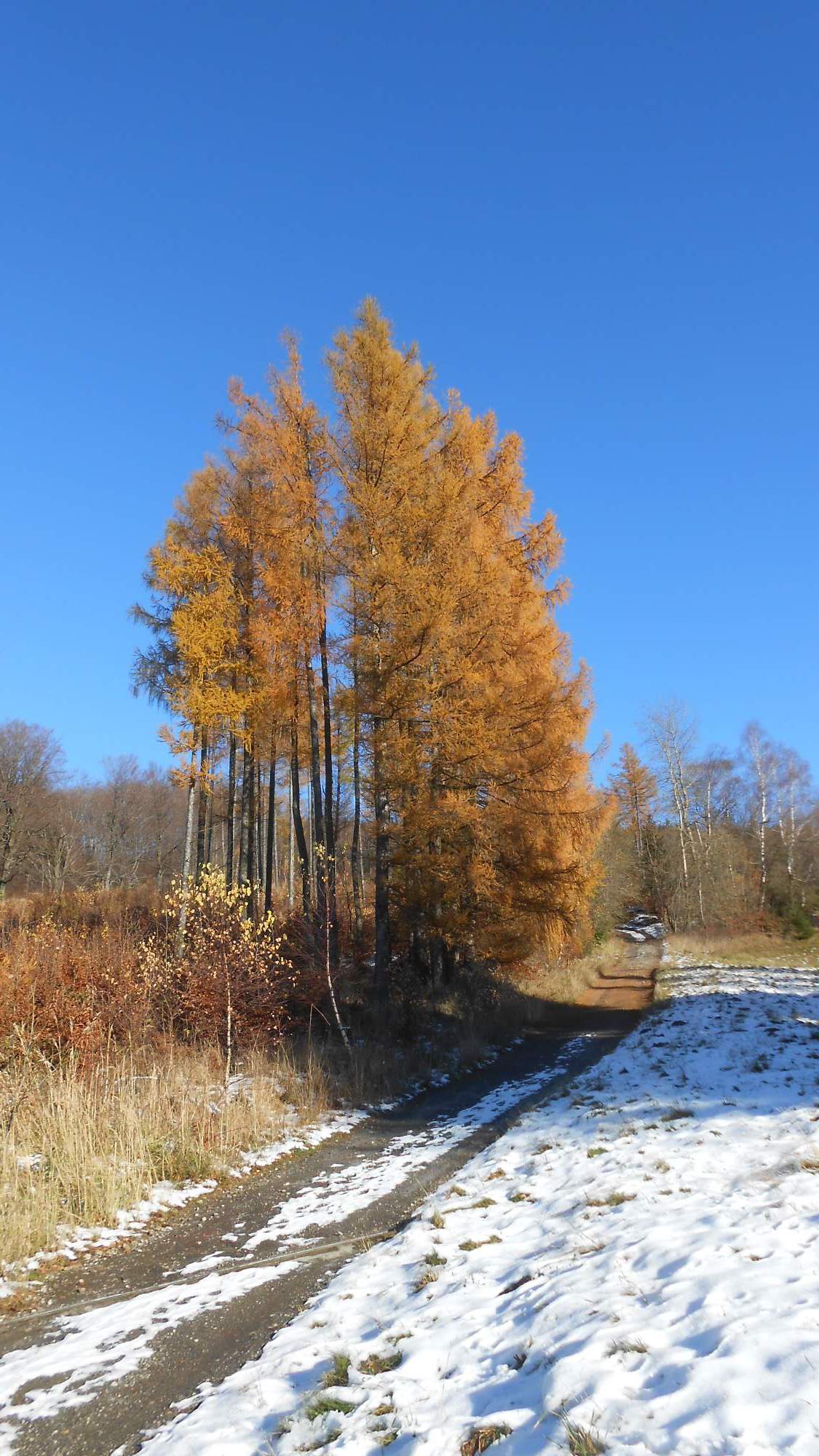 I was lucky that I had a free day on Thursday because the weather was much less stable the next days, and because the hills were empty. It was another 25 kilometers walked in solitude. And as bonus, the visibility was very high, I could see peaks that were 50-100 km away, something that was not possible the other days. Quite pity the lookout tower was closed for maintenance and so I had to do with peeking between the trees. 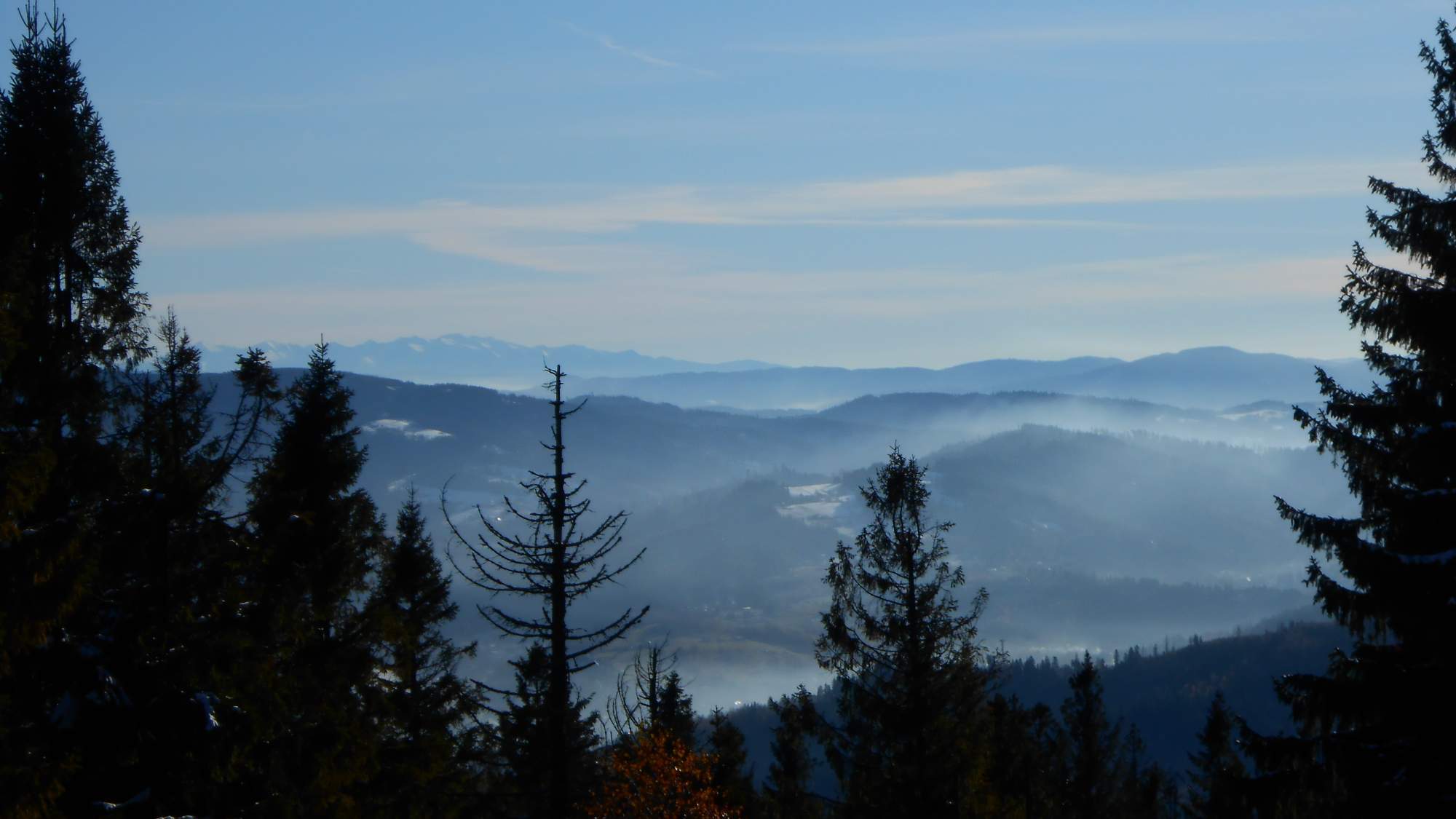 It was, after some very long time, the first time I carried binoculars. It paid off, because what I could see with them was much better than what I can show with the photo above. The advantage was in the cold night, which meant dry and cold air, probably the best conditions for such far sights. After all, the best lookout I had in recent times was in early January, when it was -22°C. Which gets me to one more advantage of days like this was. Despite starting around 0°C, the sun still had some warmth and by the time I ended the hike around 13:00, it was around 10°C, which made waiting for the train much more comfortable.

That’s it from me for this time. Now I can only hope my next week’s hike won’t follow the pattern of rainy November ends.

2 thoughts on “Seeking the first snow”