Third day’s plan were the grassy peaks I’ve seen from the previous hikes. After the rainy second day, I considered it quite great deal of luck that my clothes managed to dry overnight, but outside it was still quite misty in the morning. Typical early autumn, I guess. The forecast was optimistic, but I refused to blindly believe it. Also, this time we were using one of the most used trails, so the ticket and souvenir shack was active in that place, meaning no free entry this day.

We began between ‘Smerek’ and ‘Kalnica’ villages. The path started a bit muddy, something that made sense after the past day. The trail went though the forests, ascending continuously without any too steep portions, which made it quite pleasant. Slowly, the mist started to disperse and now I was willing to believe the weather might be actually good. 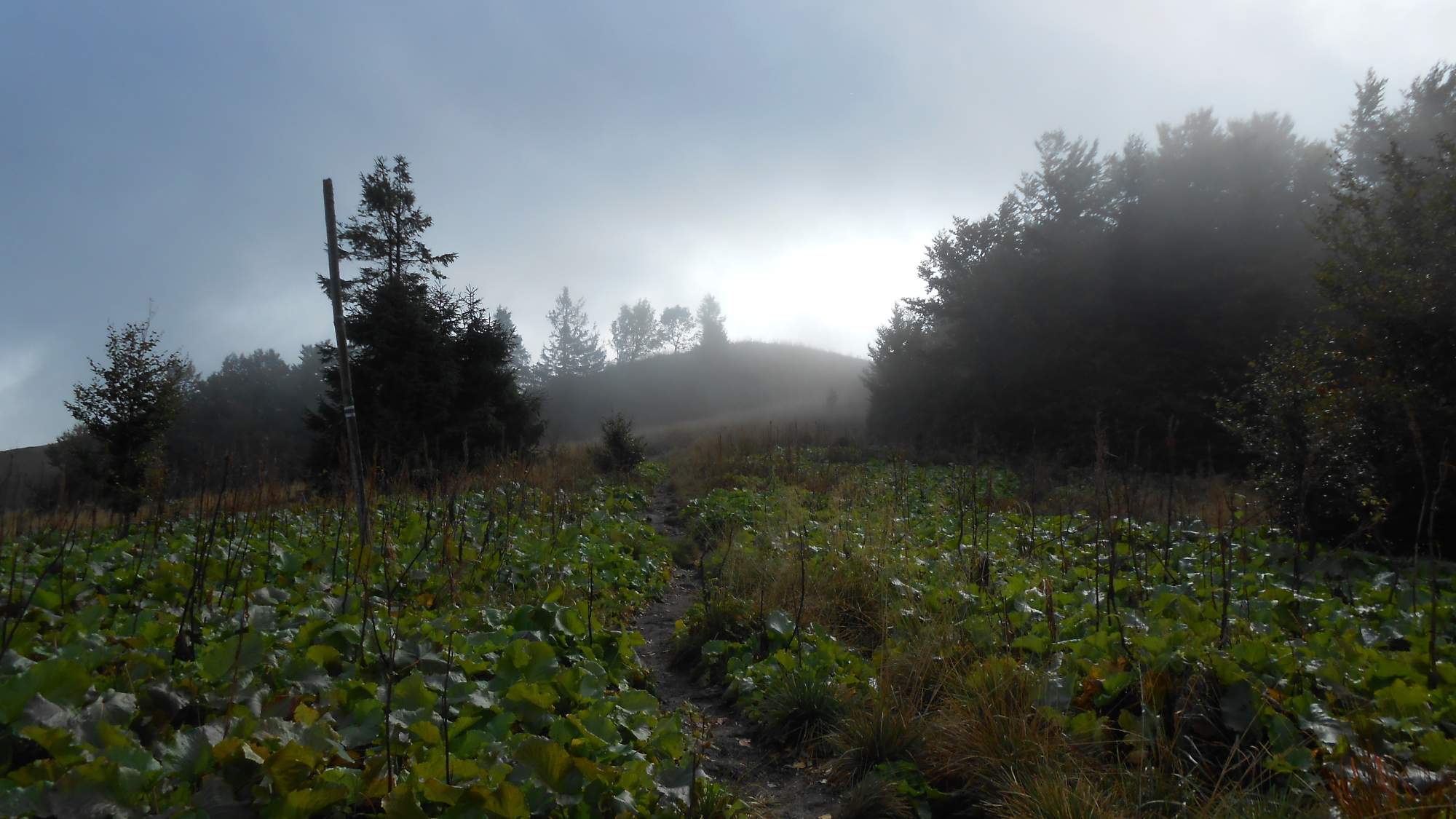 On the mist’s edge

When we got above the forest, we were also on the edge of the rising mist, giving us quite charming scenery for the moment. After a while of walk through higher foliage, I reached the last part of this first ascension, now in the yellow-tinted grass that dominates this ridge. As I usually do, I pushed this last ascension on one go, waiting for the rest of my group at the peak, taking photos. 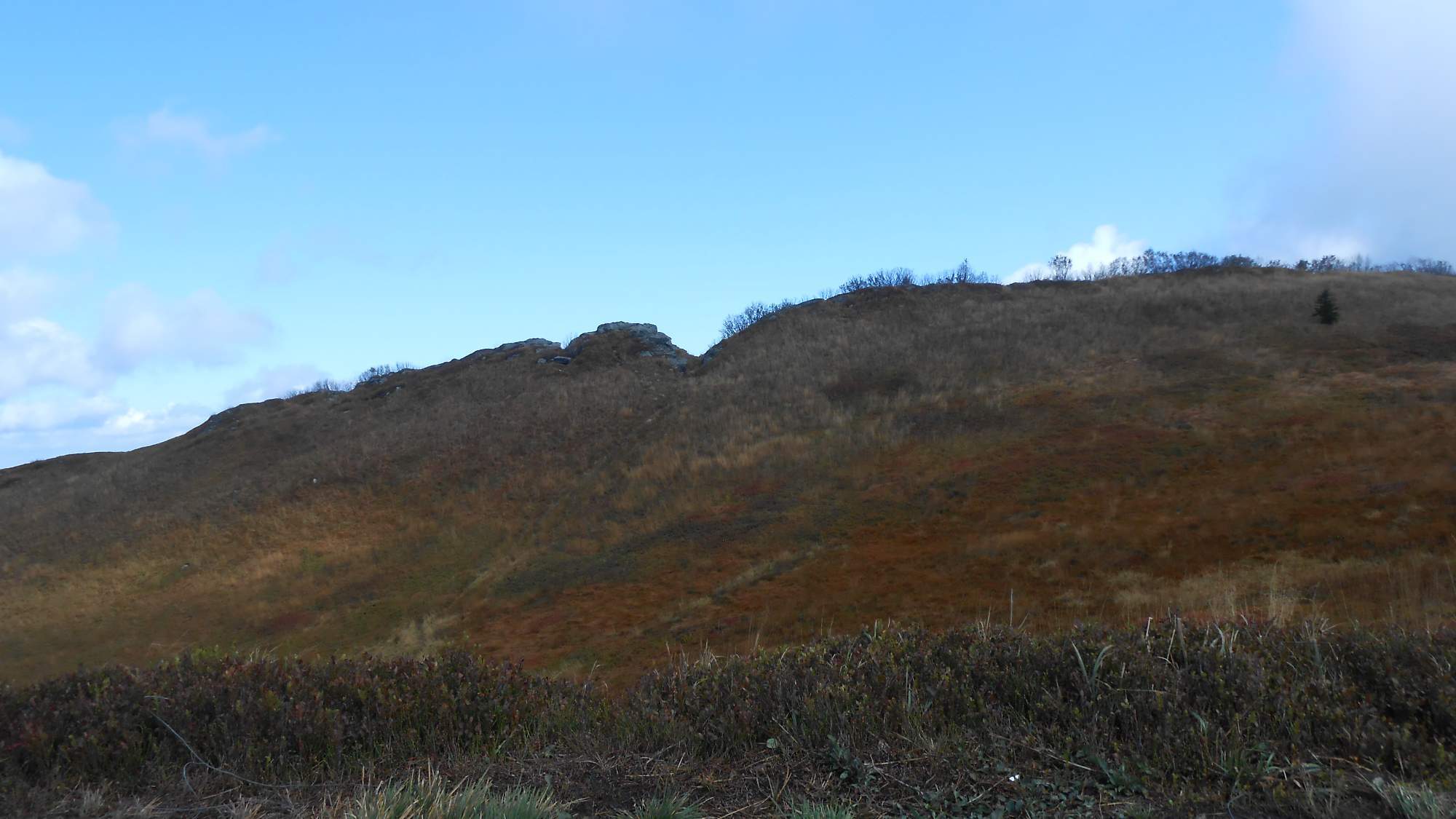 Smerek – the actual peak, path bypasses it by a few meters 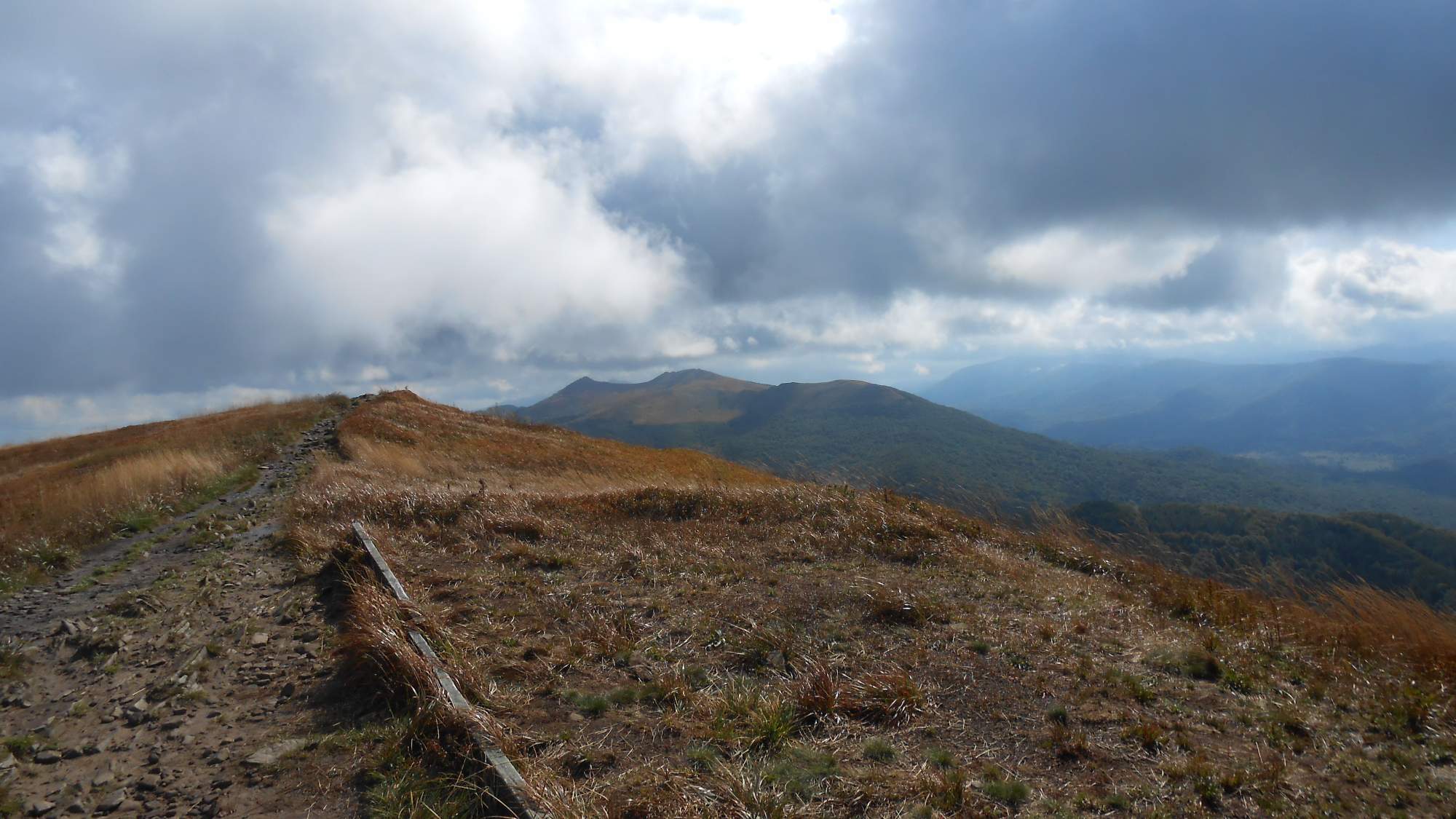 The path forward, seen from Smerek…

At that point, it turned to the usual: pleasant path on grassy plains, going slowly up and down. The best way to relax and clear your mind. The first peak, Smerek (elevation 1222) was now behind us, and many of the peaks in front of us became visible. By that point, all hints of the morning mist were long gone. 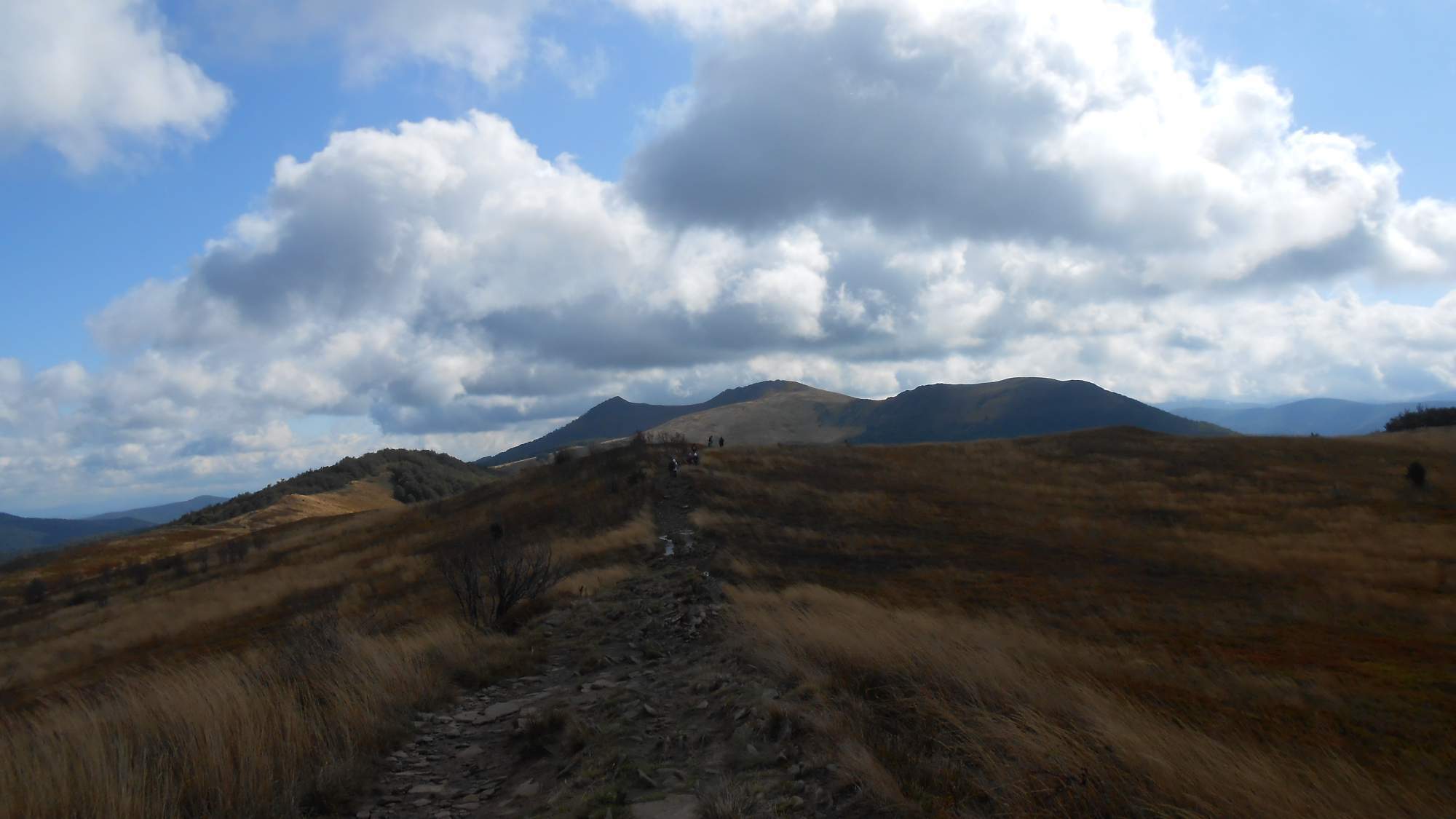 …and from a place slightly further down the trail

Despite being Monday, the trail was quite busy. I guess people in Poland know that nature has its charm in mid-September and by what I was told, the place feels like busy town square in July and August, so this was the best we could hope for. 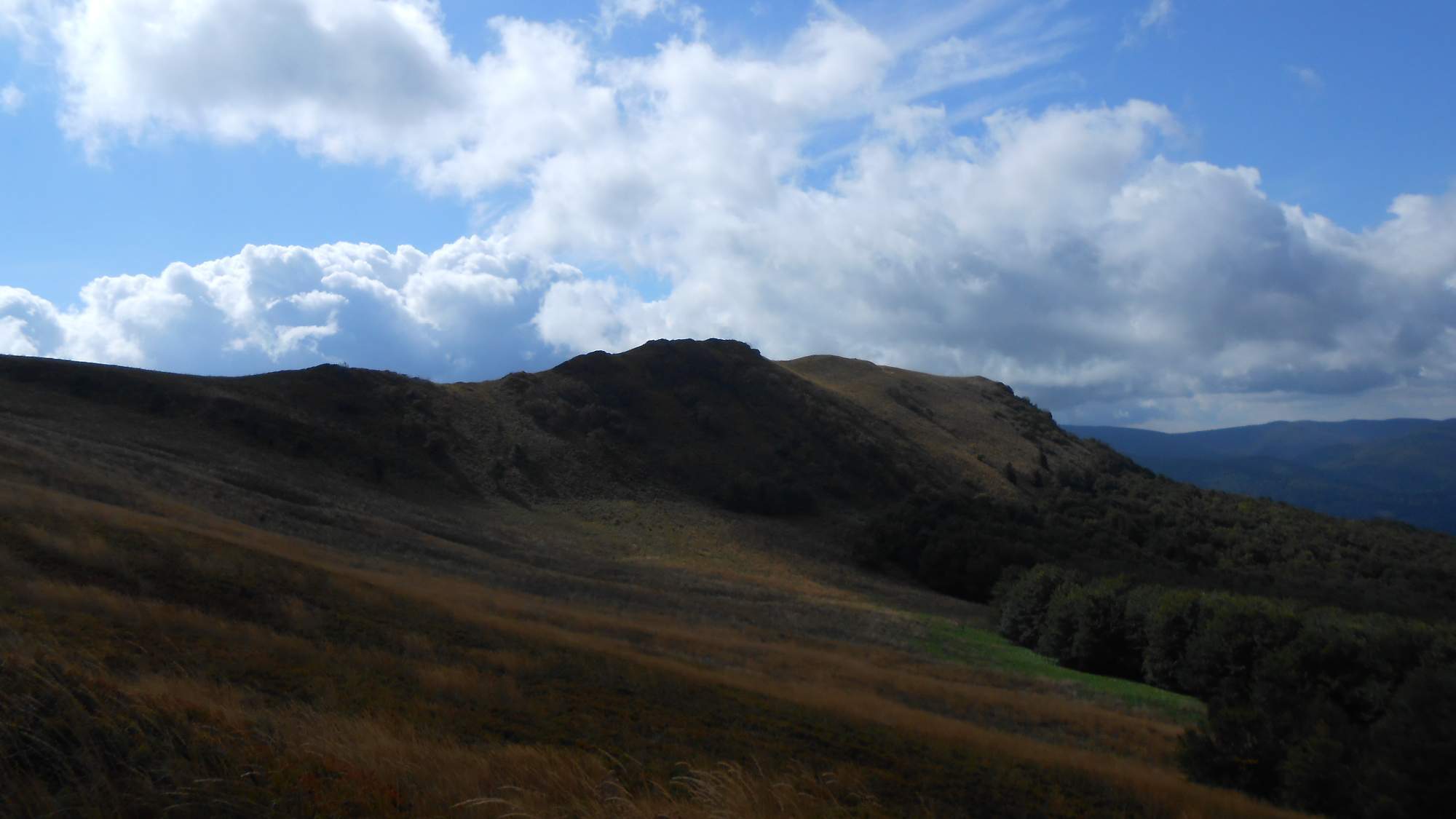 The trail gave us several nice sceneries at branching parts of the main ridge and the nearby hills. Eventually, we reached the ‘Polonina Wetlinska’ plains with the chalet up there, where we had a short break. The easy part of the trail was behind us, and because of the weather, it was enjoyable.

At this place, the ridge is interrupted, which meant descending from some 1230 meters down to some 740 meters, only to then ascend back to almost 1300 meters for the second (and slightly shorter part) of the main ridge. 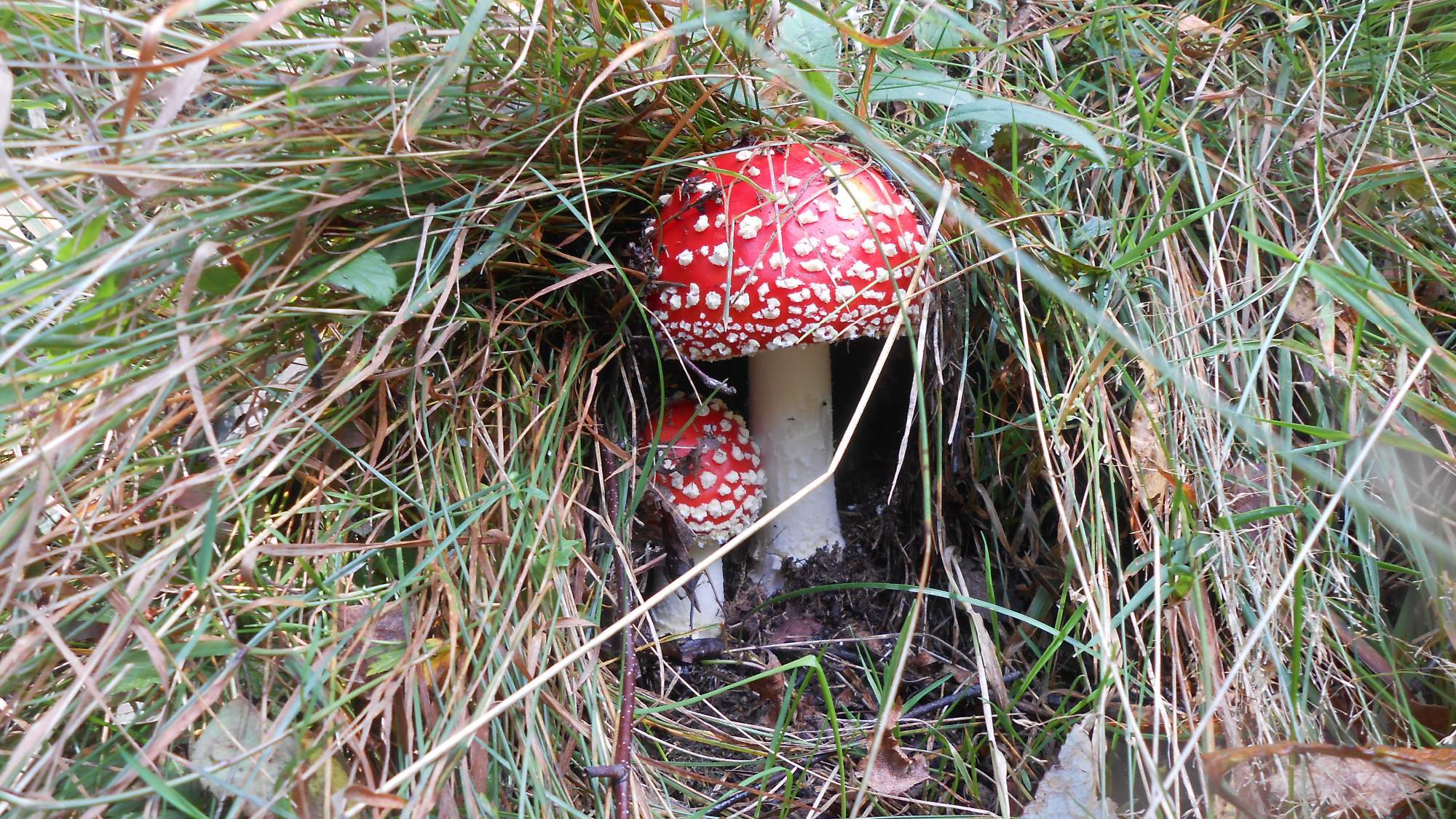 The descent was quite steep, but not as muddy. That was not true about the ascension after, where the first part of the path was pretty much nothing but mud. Then, we reached a wooden shelter, and we saw a wild animal that I haven’t seen before with my own eyes. Well, maybe not that wild, I guess wildlife will learn to not fear humans, especially if there’s a chance of getting something to eat from them… 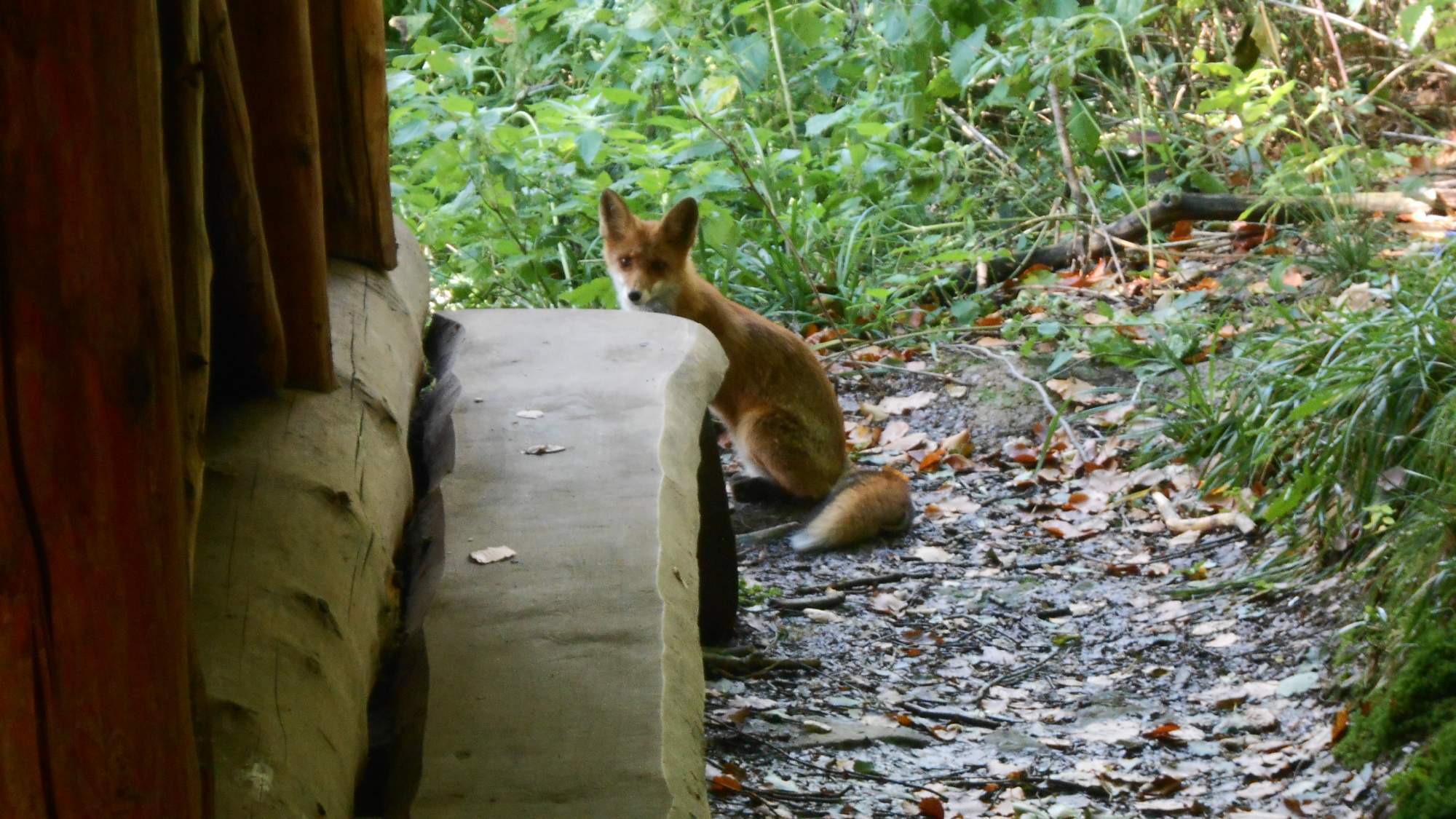 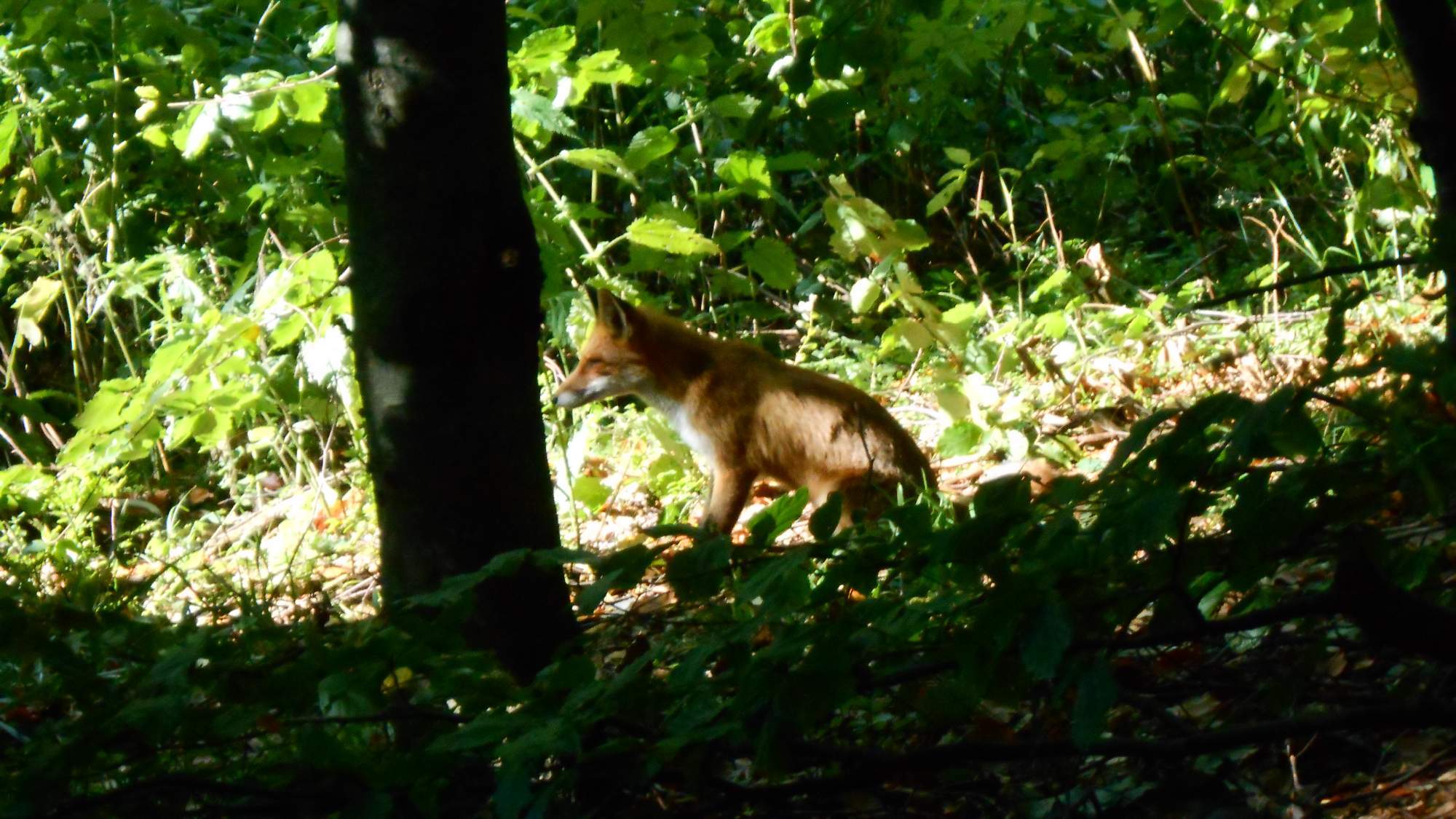 After taking a few pictures of the somewhat wild fox, we continued the climb. Despite the fact it was around 14:30 in mid-September, the sunshine had still quite some power and the ascension had me sweating a lot, something I did not expect after the wet previous day and the cold night and morning. I eventually stopped by a spring short distance below the peak, drinking the crystal clear water to preserve what I had left. 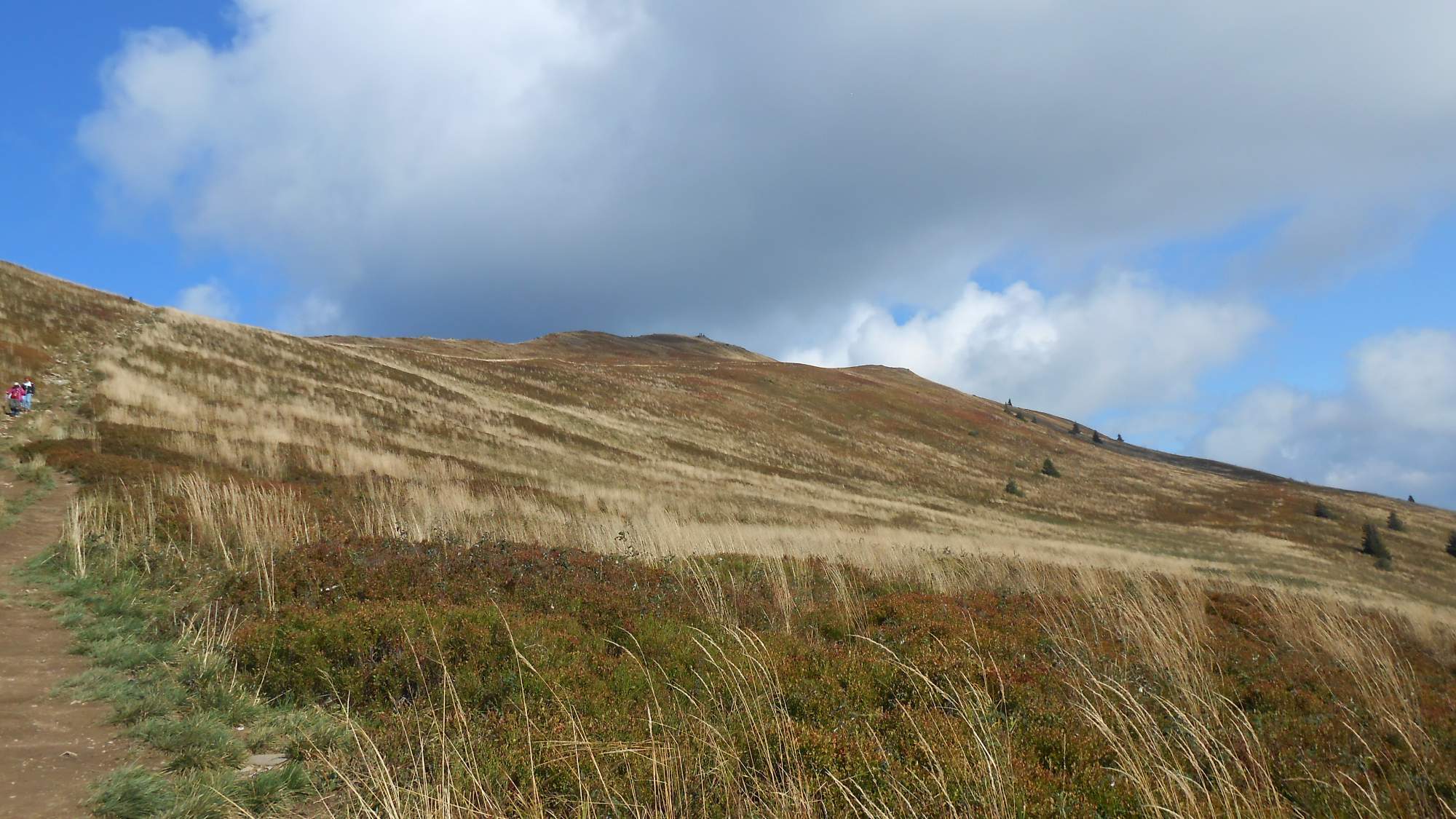 Slopes of ‘Kruhly Wierch’ a bit below the spring

After reaching the ‘Kruhly Wierch’ (probably translatable as ’round hill’) that was the day’s highest point with 1297 meters, the wind up there allowed me to cool down quite fast. Another break and then another very nice and relaxing walk on the grassy highlands. 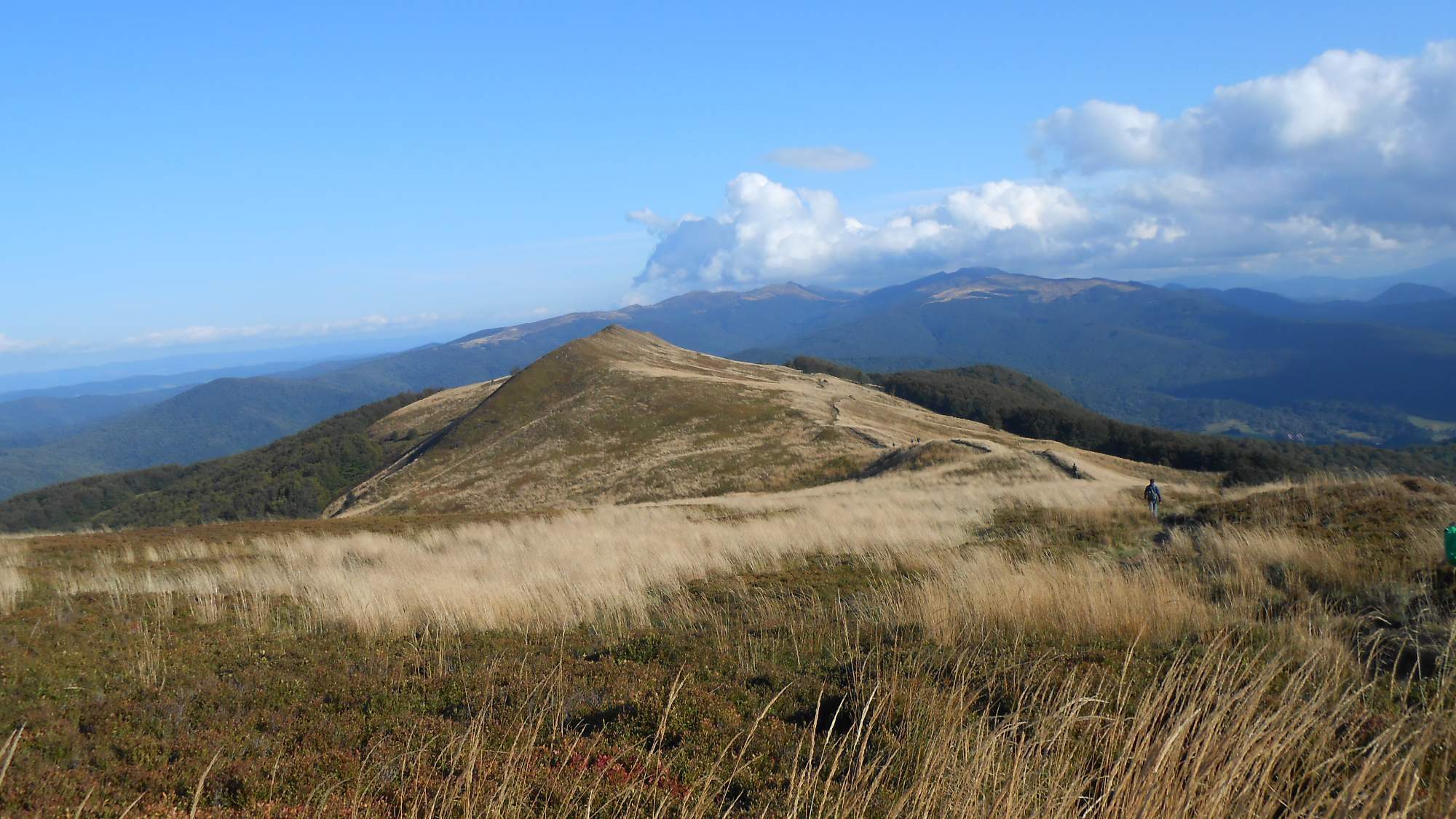 Unfortunately, this part had to come to an end as the second part of the main ridge goes down towards the ‘Ustrzyki Górne’ village before rising towards the third part that was planned for the last day. So after the descent and reaching the trail crossing, I took a turn from the main path and walked the short distance to the hotel.