Sequel to Blood Song, Tower Lord follows the story of Vaelin Al Sorna and his fellow brothers of the Sixth Order. The first book ended with failed oversea invasion which caused the small group that was together until then to be separated, which also changed how the story is told, switching between multiple points of view: Vaelin, Princess Lyrna, Reva and Frentis ‘the climber’. 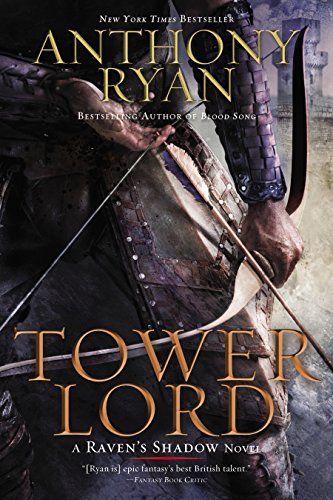 Before I get to the story itself, I think I should say that the change made the second book a bit more enjoyable to me for some reason.

Vaelin, after the end of first book, decides he had enough of war, especially as the one he fought in was forged from lies and greed. He spent five years in enemy’s prison, lost some of his friend and for the others, had no idea where they were, if they were even alive – which he does not know.

When he finally returns home, he’s sent to be Tower Lord of the Northern reaches, hoping that to be a calm time spent away from the wars, greed and lies.In the meantime, Frentis was captured to be a slave and when he finally manages to get away from the arena, he becomes a tool for a plot much darker than the greed-forged war Vaelin wants to avoid, threat that might be even more dangerous.

Reva, niece of drunken Lord Sentes Mustor, is sent to assassinate Vaelin, for reasons that border with brainwashing from the leaders of her faith.

Princess Lyrna reveals a bit more about the plans of her deceased father and how she despised them, but even she gets eventually thrown into the plot and experiencing more loss than she’d expect, testing her maybe more than any other of the characters.

It shows that there are some mysterious forces at play, some that might be very hard to stop, scheming from background for quite a long time with lots of patience. The book also shows some more development for the blood song ability, not just for Vaelin, but for many others.

This is probably all I can say without spoiling much. The four PoVs gave it much more depth as the plot is not a single line. Yet it brings more trouble as the jumps to Venrier’s PoV (intro of each part of the book) felt even more out of place in the first three parts.

I was disappointed by the almost inexistent mention of Sherin’s fate. By the end of first book, she was seen sailing away and all that’s given on the point is that “she’s gone” without any detail. Still, it was enjoyable read with hints of much more coming in the sequel.